Ranked by Forbes Magazine as a “Web Celeb”, Jimmy Donal Wales is a U.S. Internet entrepreneur, wiki pioneer, and technology visionary, who is best known as the Founder of Wikipedia, an international collaborative free content encyclopedia on the Internet, and the Wikimedia Foundation. He is co-founder of Wikia, a privately owned free web hosting service he set up in 2004.

The origins of Wikipedia began in March 2000, when Mr. Wales started Nupedia (“the free encyclopedia”), which was characterized by an extensive peer-review process designed to make its articles of a quality comparable to that of professional encyclopedias. With the addition of wikis (a collection of web pages designed to enable anyone who accesses it to contribute or modify content), the project was dubbed “Wikipedia.” Mr. Wales laid down the founding principles and content, establishing an Internet-based community of contributors during that year.

As Wikipedia expanded and its public profile grew, Mr. Wales took on the role of the project’s spokesperson and promoter through speaking engagements and media appearances. His work with Wikipedia, which has become the world’s largest encyclopedia, prompted TIME Magazine to name him one of its “100 Most Influential People,” in 2006 in the “Scientists & Thinkers” category.

In 2003, Mr. Wales founded the Wikimedia Foundation, a nonprofit charitable organization dedicated to encouraging the growth, development and distribution of free, multilingual content, and to providing the full content of these wiki-based projects to the public free of charge. The Wikimedia Foundation operates some of the largest collaboratively edited reference projects in the world, including Wikipedia, the 5th most popular website in the world.

The World Economic Forum recognized Wales as one of the “Young Global Leaders” of 2007. This prestigious award acknowledges the top 250 young leaders across the world for their professional accomplishments, their commitment to society, and their potential to contribute to shaping the future of the world.

Mr. Wales is a Fellow of the Berkman Center for Internet & Society at Harvard Law School. He serves on the Board of Directors of Socialtext, a provider of wiki technology to businesses and the non-profit organization Creative Commons. Mr. Wales has received an honorary doctorate from Knox College of Illinois and was presented with a Pioneer Award from the Electronic Frontier Foundation in 2006.

From 1994 to 2000, Wales was the research director at Chicago Options Associates, a futures and options trading firm in Chicago.

To request Jimmy Wales to be a guest speaker at your next event, contact:
Robinson Speakers Bureau | The Gold Standard For Speakers
+1 646-504-9849 | info@robinsonspeakers.com 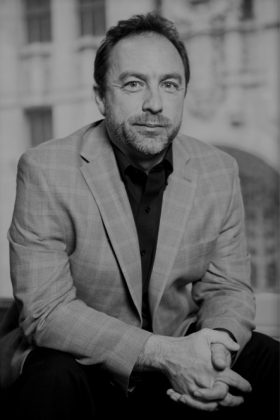