Jack Mitchell, author of Hug Your Customers, The Proven Way to Personalize Sales and Achieve Astounding Results and Hug Your Poeple The Proven Way to Hire, Inspire and Recognize Your Employees to Achieve Remarkable Results is CEO of Mitchells/Richards/Marshs, a three-generation family business that operates three upper-end brand men’s and women’s specialty stores in Westport and Greenwich, CT, and Huntington, NY.

After completing a B.A. at Wesleyan University in 1961 and an M.A. at the University of California-Berkeley, Jack Mitchell joined the family business, Ed Mitchell, Inc., which was founded by his parents, Ed and Norma, and later became Mitchells of Westport. In 1995, Mitchells acquired Richards, the leading men’s clothing store in Greenwich, CT, and in 2006 added Marshs of Huntington, Long Island, NY.

Growing up in a close-knit family and raising four sons established patterns of thoughtfulness and caring in Jack that blended seamlessly into serving the public in the retail clothing business. Under his leadership, Mitchells, Richards and Marshs have become well-known for providing exceptional customer service and high quality merchandise in an exciting, friendly and visually dynamic atmosphere.

In 2000, Richards received “Store of the Year” honors in the annual Retail Design Awards competition held by the National Association of Store Fixtures Manufacturers (NASFM) and co-sponsored by VM + SD magazine. In 2001, MR Magazine, the magazine of Menswear retailing, named Mitchells/Richards Retailer of the Year and in 2006, Jack Mitchell was listed among the top 10 Retail Visionaries of all time according to Daily News Record, one of the most widely read retail trade publications in the country.

Jack shares with his family a number of Community Leadership Awards from the Anti-Defamation League, The Menswear Division of UJA-Federation of New York, Sacred Heart University and most recently the Individual Achievement award from CancerCare of Connecticut.

Within the fashion industry, Jack Mitchell has held leadership positions in the International Menswear Group and Apparel Forum. In 2003 and again in 2005, Harvard Business School profiled the Mitchell family case study; Jack regularly attends the Executive Management courses when this case study is presented as part of the Family Business and MBA Programs.

Hyperion, a division of Disney, is in its eighth printing of Jack’s book, Hug Your Customers, The Proven Way to Personalize Sales and Achieve Astounding Results. There are now more than 167,00 copies in print in nine languages. In Hug Your Customers, Jack outlines a series of principles that can be adopted by any company to gain a larger share of current customer business and to attract new customers.

Jack has been featured on the NBC Today Show, Kudlow & Cramer TV shows as well as numerous radio interviews. His second book, published by Hyperion Spring of 2008, Hug Your People, has encouraged Jack to go back out on the speakers tour to present the principles in his new book. Jack continues to write and enjoys his “second career”!

Jack Mitchell resides in Wilton, Connecticut with his wife Linda, who is the Women’s Merchant for Mitchells/Richards/Marshs. Their four sons, Russell, Bob, Todd and Andrew all hold senior positions within the Mitchell family business.

To request Jack Mitchell to speak at your next event, contact:
Robinson Speakers | The Gold Standard For Keynote Speakers
646-504-9849 | info@robinsonspeakers.com 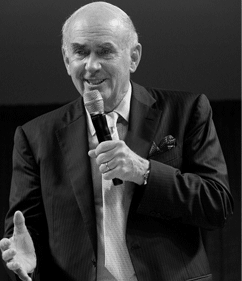