Steve Ballmer retired as CEO of Microsoft in February 2014 and didn’t take long to move onto his next job, boss of the Los Angeles Clippers. In August he closed a $2 billion purchase of the team, the highest price ever paid for an NBA squad. The hefty price tag didn’t faze Ballmer, who keeps getting richer as Microsoft shares rise steadily since his departure. Ballmer officially became Microsoft’s largest single shareholder in April, as his former Harvard classmate Bill Gates continued to sell shares in an effort to diversify his fortune. Ballmer’s passion for basketball is nothing new. Ballmer began buying season tickets to the Seattle SuperSonics in the 1980s, and Microsoft cofounder Paul Allen, owner of the Portland Trail Blazers, encouraged Ballmer to buy a team of his own. He failed in two previous bids – one to buy the SuperSonics in 2006 and another to acquire the Sacramento Kings in 2013 – before purchasing the Clippers.

To request Steve Ballmer to speak at your next event, contact:
Robinson Speakers | The Gold Standard For Keynote Speakers
646-504-9849 | info@robinsonspeakers.com 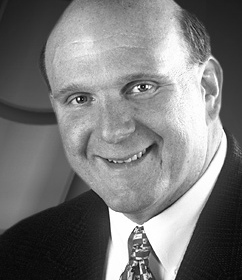