A. I. Bias, A. I. and The Elimination Of Human Jobs, Algorithms And The Importance Of Excellent Quality Data, Metaveerse Expert

What Can You Expect Booking Peter To Speak?

Peter Haas is an excellent choice for any audience hoping to understand the impact Artificial Intelligence will have on our future. How far along its path are we? What concerns should we have? Which concerns are grounded in reality, and which ones are dystopian ideas decades from coming to fruition? As a professor at one of America’s most elite Ivy League universities, Peter spends his days studying the benefits and dangers of modern algorithms, and related robotic technologies, and makes shrewd assessments about their future impact.

Peter Haas predicts that in the next 10 years, 400 million jobs across planet earth will be eliminated by automation, stating, “There is no way for labor costs to compete with the base price of electricity.” Exactly how this number of jobs will be eliminated is a fascination, and the sectors that will be affected stretches far beyond burger chefs and truck drivers. Surprisingly, health care, airlines, lawyers and accountants will all suffer huge job losses, and Peter can tailor any speech to hone-in on these verticals.

But does this mean our planet will one day be run by algorithms? If anyone has the answer to this complex question, it is Peter Haas of Brown University.

Peter’s speech is chock full of fascinating insights, dispelling popular myths, revealing some of the latest technological innovations, explaining the dangers of bad data sets, and sheds light on our own future working in tandem with Artificial Intelligence.

Currently, Peter Haas is the Associate Director of the Brown University Humanity Centered Robotics Initiative where he helps in research on AR, VR and MR interfaces for robots, MR shared mental models with robots, social robotics for the elderly, UAV autonomy, moral norms in Artificial Intelligence A. I., and some peripheral pick & place and motion planning work.

Peter thinks POMDP variants will be the next AI technique to “pop” the way deep learning did. Previously, Peter was the Co Founder and COO of XactSense, a UAV manufacturer working on LIDAR mapping. Prior to XactSense, Peter founded AIDG – a small hardware enterprise accelerator in Haiti and Guatemala. AIDG did design for extreme affordability work and provided seed funding to local entrepreneurs. The largest company launched with AIDG support, Kingo Energy, now serves 2.5 million people with solar systems in Central America.

Peter has received both TED and Echoing Green fellowships. He has been a speaker at TED Global, The World Bank, Harvard University and other venues. He holds a Philosophy B.A. from Yale University.

To request Peter Haas to speak at your next event, contact:
Robinson Speakers | The Gold Standard For Keynote Speakers
646-504-9849 | info@robinsonspeakers.com 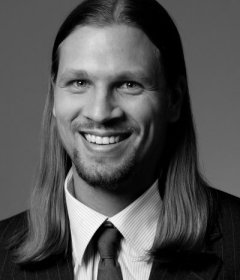