José Morey, M.D., is a health and technology keynote speaker and a consultant for NASA, IBM, Hyperloop Transportation, and Liberty Bio Security. His talks focus on the future of health and medicine in terms of emerging technologies, such as Artificial Intelligence, 3D printing, hyperloop travel, and space exploration.

His expertise in big data and innovation have made him a much sought-after consultant in many industries. As Chief Medical Innovation Officer for Liberty BioSecurity, he helps drive innovation in genetic intelligence, national defense biotechnologies, precision medicine and augmented human performance.

As Associated Chief Health Officer for IBM Watson Health, he helped develop AI medical technologies. As Chief Engineering Council in charge of Innovation for Hyperloop Transportation Technologies, he aided in the development of the augmented reality window technology to alleviate passenger discomfort. And as the Medical Technology and Artificial Intelligence Adviser for NASA iTech, he helped evaluate research initiatives that would develop novel biotechnology to meet the 2030 Mars Mission objectives and deep space exploration.

Morey has also consulted with other companies and healthcare systems to help create and train their deep learning algorithms and neural networks to create intelligent systems in healthcare and aerospace.

Morey sits on several AI advisory boards and has over 50 peer-reviewed publications, presentations, and lectures. He also has a seat on the Informatics Leadership Council for the American College of Radiology.

He has given talks to NASA360, the Radiologic Society of North America, HIIMS, Academy Health, Health Datapalooza, Tech.Co, Frost & Sullivan Executive MindXchange, Stifel Nicolaus Healthcare Investment Conference, the Chinese Medical Association and the Senate of the Commonwealth of Puerto Rico.

Morey holds an adjunct professorship of Radiology and Biomedical Imaging at the University of Virginia and at Eastern Virginia Medical School. He is a guest lecturer at Singularity University, and a member of the Forbes Technology Council.

To request Jose Morey to be a speaker at your next event, contact:
Robinson Speakers Bureau | The Gold Standard For Keynote Speakers
+1 646-504-9849 | info@robinsonspeakers.com 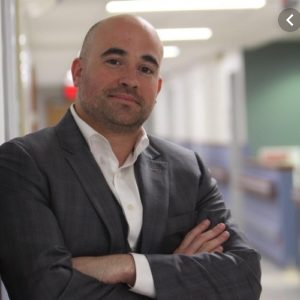