Executive Vice President of Development & Acquisitions of The Trump Organization

As Executive Vice President of Development & Acquisitions of The Trump Organization, Ms. Trump is charged with the domestic and global expansion of the company’s real estate interests. Ms. Trump directs all areas of the company’s real estate and hotel management platforms. She is involved in all decisions—large and small—from the acquisition phase to determining the interior selections for residences and hotel suites.

Ms. Trump founded the Trump Hotel Collection with her brothers in 2007. Today, the company is regarded as one of the leading hotel management companies in the industry. In addition to overseeing operations, Ms. Trump also spearheads the interior design decisions for the Trump Hotel Collectionproperties and provides the creative vision for the brand as a whole. Currently the collection boasts 7 luxury properties and will continue to expand domestically and abroad with the recent additions of The Old Post Office Building in Washington, D.C. and Doral Resort & Spa in Miami, Florida.

In addition to her work at The Trump Organization, Ivanka Trump is the principal of Ivanka Trump Fine Jewelry, which launched to great success in 2007 and in the past 3 years she has expanded her brand into collections of apparel, footwear, handbags, outerwear, sunglasses and fragrance. Ms. Trump recently re-launched her fine jewelry store as the flagship Ivanka Trump Boutique, a lifestyle store that encompasses all of her brands.

Ms. Trump is currently one of the stars of NBC’s wildly successful “Celebrity Apprentice” with her father Donald J. Trump, and brother Donald, Jr. She previously appeared on NBC’s Emmy nominated, globally syndicated “The Apprentice” as an advisor.

To request Ivanka Trump to speak at your next event, contact:
Robinson Speakers | The Gold Standard For Keynote Speakers
646-504-9849 | info@robinsonspeakers.com 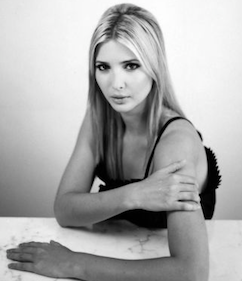