Lauren Bush is the CEO, Creative Director, and Co-Founder of FEED Projects, as well as the Chairman of the Board and Co-Founder of the FEED Foundation. Lauren started her work as an Honorary Spokesperson for the World Food Programme (WFP) in 2004, when she helped to launch their Universities Fighting Hunger initiative. Over the past four years Lauren has traveled to many countries with WFP and UNICEF including Guatemala, Cambodia, Lesotho, Sri Lanka, Chad, Tanzania, Rwanda, Kenya, Uganda, and Honduras to learn about the realities of poverty and hunger firsthand. Inspired by her travels, in 2005 she conceptualized and designed the initial FEED 1 bag, which feeds one child in school for one year through WFP, as a way for consumers to give back in a tangible and meaningful way.

In 2007, she started FEED Projects, LLC to sell FEED bags, and, in 2008, she co-founded the FEED Foundation to increase FEED’s impact in the fight against hunger. To date, FEED has partnered with companies like Whole Foods Market, Barnes & Noble, the Gap, HSN, Lord & Taylor, Pottery Barn, Bergdorf Goodman, Harrods, and many more. Through the sale of eco-friendly products, mainly bags, FEED Projects, in partnership with the FEED Foundation, has donated over $6 million dollars to the WFP’s school feeding program, which equates to over 60 million meals to school children.

In 2008, Lauren launched a new fashion brand, Lauren Pierce Atelier. By sourcing fabric that is handmade by women artisans around the world, as well as eco-friendly fabrics, this women’s wear line lives up to high environmental and humanitarian standards. Most of the fabric sourced to create the line has been hand-dyed by women in the Congo, thus making each piece beautiful and one-of-a-kind while also supporting women’s livelihoods. The line has been sold in stores around the world, such as Barneys New York. Lauren was born in Denver, Colorado, and grew up in Houston, Texas. As a model, Lauren has carved her own niche in the fashion world and was featured on the cover of various publications such as Vogue Australia, Glamour, Tatler, W, and Town and Country. Lauren graduated from Princeton University in 2006 with a B.A. in Anthropology and certificate in Photography. She now resides in New York City, where she works on FEED, Lauren Pierce, and other socially conscious and eco-friendly projects. In 2008, she was given the Marie Claire Prix De La Moda Humanitarian Award for her work with FEED. In 2009, she was honored as a Fortune Most Powerful Woman Entrepreneur, and in 2010 she was included on Inc.’s “30 Under 30” List and given the Accessory Council’s Humanitarian Award.

To request Lauren Bush Lauren to speak at your next event, contact:
Robinson Speakers | The Gold Standard For Keynote Speakers
646-504-9849 | info@robinsonspeakers.com 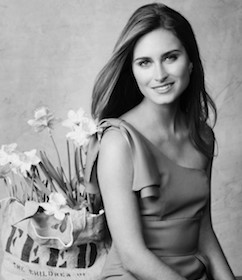