Peter Guber, a prominent figure in the entertainment industry for over thirty years, serves as the Co-Executive Chairman of the Golden State Warriors. As co-managing partner, he joined Joe Lacob as the driving forces behind the current ownership group’s NBA record-setting bid to purchase the Warriors in 2010.

Guber brings lifelong experience in sports and location based entertainment recognizing the importance of enhancing every aspect of fan experience. In may of 2012, Guber joined Lacob, NBA Commissioner David Stern and San Francisco Mayor Edwin Lee, in announcing the Warriors’ intention to build a privately financed sports and entertainment complex on Piers 30-32 and Seawall Lot 330 on the waterfront in San Francisco.

Guber is among the most successful executives and entrepreneurs in the entertainment and communications industries. Prior to founding Mandalay Entertainment, Guber’s impressive resume included serving as the Chairman & CEO of Sony Pictures Entertainment, President of Columbia Pictures, Chairman and CEO of Polygram Entertainment and Co-Owner and Co-Chairman of Casablanca Record & Filmworks. The list of films that he personally produced or executive produced includes Rain Man, Batman, The Color Purple, Midnight Express, Gorillas in the Mist, The Witches of Eastwick, Missing and Flashdance. Guber’s movies have earned over three billion dollars worldwide, while also garnering more than 50 Academy Award nominations.

In the professional sports industry, Mandalay Sports Entertainment has become a national sports entertainment provider, owning and/or managing professional baseball franchises, sports marketing and venue management. The Dayton Dragons, the Mandalay-owned Class A affiliate of the Cincinnati Reds, established a North American professional sports record with their 815th consecutive sellout on July 9, 2011, surpassing the previous mark (814) held by the Portland Trailblazers. Additionally, Guber together with Guggenheim Group and Magic Johnson, acquired the Los Angeles Dodgers. Guber is an owner and Chairman of Dick Clark Productions, a leading independent producer of television programming including such perennial hits as the American Music Awards, Golden Globe Awards, Dick Clark’s New Year’s Rockin’ Eve, and So You Think You Can Dance.

Guber is a pre-IPO investor in Demand Media who appointed him to its board of directors. He is Chairman of Mandalay Digital Group, a NASDAQ listed leading global mobile data services provider and is Chairman of Mandalay Sports Media, a partnership with Mike Tollin, Emmy and Peabody Award-winning film and television producer/director and CAA Sports, the world’s leading athlete representation agency.

Guber is a full professor at UCLA, teaching at the Anderson School of Management and the School of Theater Film Television and Digital Media. He is a member of the UCLA Foundation Board of Trustees, as well as the winner of UCLA’s prestigious Service Award for his accomplishments in association with the school. Guber is the Chair of the Founding Board of Advisors for the Center for Managing Enterprises in Media, Entertainment & Sports (MEMES) at the UCLA Anderson School of Management.

Guber served as the co-host of the critically acclaimed television show, Shootout, for six years on American Movie Classics cable network. AMC moved Guber’s talents to prime time with Story Makers, a series of one hour specials on the cable network. Guber was most recently seen on Starz/Encore as co-host of In the House, a weekly news and interview show focusing on industry trends in pop culture. He can currently be seen as an Entertainment and Media Analyst on Fox Business News.

A noted author, Guber’s third book, Tell To Win – Connect, Persuade, and Triumph with the Hidden Power of Story – was published by Crown Business on March 1, 2011, and became an instant #1 NY Times bestseller. Fortune magazine chose Tell To Win as one of their “5 Business Books You Can Really Use” and Hudson Booksellers, retail book stores in airports throughout North America, chose Tell To Win as one of the “5 Best Business Books of the Year.” Tell to Win is in its 13th printing.

Guber was recruited by Columbia Pictures out of NYU’s Graduate School of Business, where he was pursuing an MBA. He holds a BA, Master of Law and Juris Doctorate degrees. He received his honorary doctorate in Fine Arts from the University of Connecticut, was named Albert Gallatin Fellow at New York University; is a recipient of Syracuse University’s George Arents Pioneer Award, the highest honor that can be given an alumnus, for his distinguished work in film; and is also a recipient of USC’s Dean’s Award for National Business Leadership.

To request Peter Guber to speak at your next event, contact:
Robinson Speakers | The Gold Standard For Keynote Speakers
646-504-9849 | info@robinsonspeakers.com

Peter Hinssen : The Impact of Technology 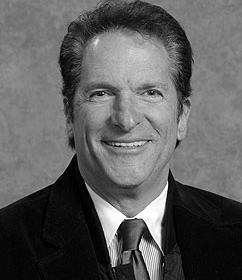