The Father of Supply-Side Economics

*Speeches are tailored to client’s specifications

Dr. Arthur Laffer is the founder and chairman of an economic research and consulting firm that provides investment-research services to institutional asset managers. Since its inception in 1979, the firm’s research has focused on the interconnecting macroeconomic, political and demographic changes affecting global financial markets.

Dr. Laffer’s economic acumen and influence in triggering a worldwide tax cutting movement in the 1980s have earned him the distinction in many publications as “The Father of Supply-Side Economics.” One of his earliest successes in shaping public policy was his involvement in Proposition 13, the groundbreaking California initiative that drastically cut property taxes in the state in 1978.

Years of experience and success in advising on a governmental level have distinguished Dr. Laffer in the business community as well. He currently sits on the board of directors and a multitude of public and private companies, which include U.S. Filter Corporation, MasTec, Inc., Neff Corp., Nicholas-Applegate Mutual Funds, Nicholas-Applegate Growth Equity Fund, Coinmach Laundry Corporation and Oxigene, Inc.

Recently, Dr. Laffer was appointed as a founding member of the Congressional Policy Advisory Board, a select group of advisors who assist in shaping legislative policies for the 105th United States Congress.

Dr. Laffer has been widely acknowledged for his economic achievements. He was noted in Time magazine’s March 19, 1999, cover story as one of “The Century’s Greatest Minds” for inventing the Laffer Curve, which it deemed one of “a few of the advances that powered this extraordinary century.” The Laffer Curve supposes that for a given economy there is an optimal income tax level to maximize tax revenues. His creation of the Laffer Curve was deemed a “memorable event” in financial history by the Institutional Investor in its July 1992 Silver Anniversary issue.

The awards that Dr. Laffer has received for his economic work include two Graham and Dodd Awards from the Financial Analyst Federation for outstanding feature articles published in the Financial Analysts Journal, the Distinguished Service Award by the National Association of Investment Clubs, the Adam Smith Award for his insights and contributions to the Wealth of Nations and the Daniel Webster Award for public speaking by the International Platform Association. Dr. Laffer also earned the Father of the Year award from the West Coast Father’s Day Committee in 1983.

An economist with a great sense of humor and grasp of today’s realities, Dr. Art Laffer offers a concise analysis of the worldwide economy and what looms ahead for the 21st century.

To request Dr. Arthur Laffer to speak at your next event, contact:
Robinson Speakers | The Gold Standard For Keynote Speakers
646-504-9849 | info@robinsonspeakers.com 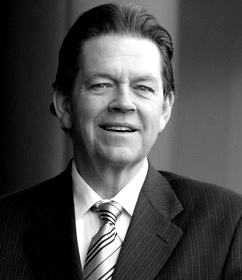