One of the most sophisticated financial experts in the country, Jeremy Siegel delves much deeper than the fundamental issues on the business page. He analyzes every facet of the markets and helps you create a strategy that builds on changing trends, historic patterns and his industry-tested personal ability to chart the future shifts of global economies.

On stage, Professor Siegel is a sensation, in high demand throughout the world to lecture on the future of the economy, and the direction of America after the financial catastrophe of 2008.

Audiences across America have been captivated by Dr. Siegel, one of the top ranked Wharton Business School Professors at the University of Pennsylvania. He graduated from Columbia University in 1967, received his Ph.D. in Economics from M.I.T. in 1971, and spent one year as a National Science Foundation Post-Doctoral Fellow at Harvard University.

Jeremy Siegel’s book “Stocks for the Long Run,” was chosen by the Washington Post and Business Week as one of the ten best investment books of all time. The professor lectures extensively about the economy and financial markets, and appears frequently on CNN, CNBC, NPR and other networks. He has been published in The Wall Street Journal, Barron’s, The Financial Times and many national and international news media.

His latest book, “The Future for Investors: Why the Tried and the True Triumph over the Bold and New,” (2005) was one of the best business books in 2005 according to Business Week, the Financial Times, and Barron’s. The same year, the professor received the Distinguished Leadership Award by the Securities Industry Association, and the coveted Nicholas Molodovsky Award by the Chartered Financial Analysts Institute.

Professor Siegel has been ranked among the greatest business school professors in the world, and is without question a foremost authority on the state of our economy. He is dazzling on stage, not only for his enormous intellect, but for his candidly refreshing views, and animated, upbeat delivery, perfect for any large conference, hedge fund client meeting and all high level gatherings.

To request Jeremy Siegel to speak at your next event, contact:
Robinson Speakers | The Gold Standard For Keynote Speakers
646-504-9849 | info@robinsonspeakers.com 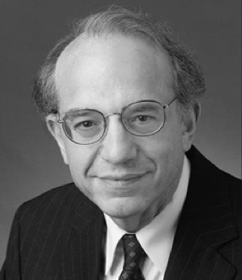