Larry Kudlow is senior contributor to CNBC and was formerly the host of their prime-time program The Kudlow Report.

He is also the host of The Larry Kudlow Show, which broadcasts each Saturday on WABC Radio and is syndicated nationally by Cumulus Media. Kudlow is a nationally syndicated columnist, a contributing editor of National Review magazine and a columnist and economics editor for National Review Online. He is the author of American Abundance: The New Economic and Moral Prosperity.

During President Ronald Reagan’s first term, Kudlow was the associate director for economics and planning, Office of Management and Budget, Executive Office of the President, where he was engaged in the development of the administration’s economic and budget policy.

He is on the board of directors of Hazelden New York, Mountainside Treatment Center and Catholic Cluster School of the Diocese of Bridgeport, CT, and a former Fordham University board of trustees member.

Kudlow is CEO of Kudlow & Co., LLC, an economic research firm. His blog “Money Politic$” can be found at www.kudlow.com.

He was formerly chief economist and senior managing director of Bear Stearns & Company. Kudlow started his professional career at the Federal Reserve Bank of New York, where he worked in open market operations and bank supervision. Kudlow was educated at the University of Rochester and Princeton University’s Woodrow Wilson School of Public and International Affairs.

To request Larry Kudlow to speak at your next event, contact:
Robinson Speakers | The Gold Standard For Keynote Speakers
646-504-9849 | info@robinsonspeakers.com 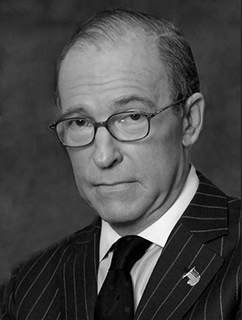