In Partnership with CAA

John Cleese was born and brought up in Weston-super-Mare. However, he recovered to win a place to study science at Cambridge. After sampling the conversation in the Chemistry laboratories, he switched to Law.

The success of the 1963 Cambridge Footlights Revue which played in the West End, and on Broadway, saved him from a legal career. He first shot to fame in England with The Frost Report in 1966, and in 1969 co-created Monty Python’s Flying Circus.

The team went on to conquer the world with four cult TV series and four hugely successful films, And Now For Something Completely Different (1971), Monty Python and the Holy Grail (1974), The Life of Brian (1979) and The Meaning of Life (1983). After leaving Python, Cleese moved on to create Basil Fawlty, the hotel manager from hell in Fawlty Towers. As one of the most successful TV series ever made, the 12 episodes of Fawlty Towers have been repeated on the BBC many times.

Less well known is the fact that John Cleese co-wrote (with Robin Skynner) two best selling books on psychology, Families and How to Survive Them, and Life and How to Survive It. He also co-founded Video Arts in 1972, which became the largest producer of management and sales training films outside the United States. Video Arts was sold in 1991.

John started the Secret Policeman’s Ball concerts for Amnesty International, and has continued to do a lot of charity work, much of it, like The Human Face (2001), for the BBC. In his twilight years he passes his time writing film scripts, making speeches to business audiences, doing seminars on creativity, teaching at Cornell and UCSB, playing “The Kin” in the Shrek movies, constructing a virtual reality (his website, www.thejohncleese.com) raising chickens, and, of course, trying to grow a decent tomato.

To request John Cleese to speak at your next event, contact:
Robinson Speakers | The Gold Standard For Keynote Speakers
646-504-9849 | info@robinsonspeakers.com 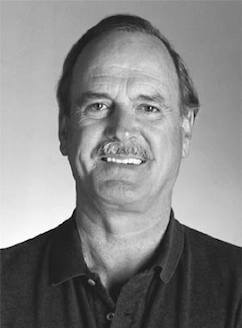