Jay Leno’s late night television ratings domination included more than two decades of “The Tonight Show with Jay Leno,” winning every consecutive quarter of his hosting over the past 19 years. After resuming hosting the 11:35 PM program following a one-time brief interruption of these duties, Jay once again took the show to the top, leading all of the ensuing quarters handily for another three years. Under his helm, the show was honored by the Television Academy with an Emmy for “Outstanding Comedy, Variety or Music Series.” “The Tonight Show” has also taken home the trophy for “Favorite Late Night Show” in the annual TV Guide Awards determined by voting viewers, and Jay was recently installed in the Television Academy’s Broadcast Hall of Fame.

Leno, himself, is the recipient of the People’s Choice Award and other honors, including the Harris Poll selection as most popular star on television. Other personal highlights include the Hasty Pudding Award at Harvard University, an honor whose sole prior comedy/talk host recipient was Johnny Carson; receiving a star on Hollywood’s Walk of Fame, and being the first person to drive the pace car of all major NASCAR events.

It was in May of 1992 when Jay followed in the footsteps of legendary NBC late-night hosts Steve Allen, Jack Paar and Johnny Carson as “Tonight Show” host. Pitted against another television superstar David Letterman in the ll:35 PM hour, Jay became the ratings leader of late night within two years and never looked back, establishing firm leadership in all demographic categories, a winning streak exceeding 50 consecutive quarters.

To request Jay Leno to be a speaker at your next event, contact:
Robinson Speakers Bureau | The Gold Standard For Keynote Speakers
+1 646-504-9849 | info@robinsonspeakers.com 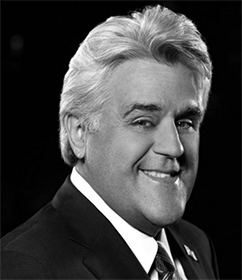