Emma McLaughlin & Nicola Kraus are the co-authors of The Nanny Diaries, the literary sensation that rose to the top of The New York Times book charts to become the longest-running best seller of 2002. Adapted into a major motion picture in 2007, “The Nanny Diaries” stars Scarlett Johansson, Laura Linney and Alicia Keys.

A wickedly smart satire, “The Nanny Diaries,” is a comic account of a young woman-aptly named “Nanny”-who is employed by an affluent, dysfunctional New York City family-”the X’s.” Fabulously wealthy but truly awful, Mrs. X keeps her lingerie in labeled Ziploc bags and devotes her considerable free time to pampering herself and exploiting her servants. Mr. X is a potbellied philanderer oblivious to any concept of humanity. Together, the neglect of their young son borders on criminal.

In 2004, McLaughlin and Kraus co-authored “Citizen Girl” (Atria), a no-holds-barred look at one woman’s career odyssey. The book tells the tale of an ambitious and idealistic young woman confronting what it means to be young and female in the “new economy.” Shockingly funny and startlingly relevant, “Citizen Girl” captures with biting accuracy the paradoxical and impersonal world of a corporate life in which a college degree entitles one (with a little luck) to make copies and color-coordinate file folders.

Having struck a chord with millions of Americans, McLaughlin and Kraus grace the podium with a brand new lecture series. It is tailored for literary students, entrepreneurs, business owners and professional women. They bring a fresh perspective to the business of partnerships & collaboration, the art of social satire, how to navigate the publishing world, and they explain, with their signature wit and candor, how they built a multi-million dollar brand in their mid-twenties, and sustained it for nearly a decade.

McLaughlin and Kraus met at New York University’s Gallatin School of Individualized Study, where both graduated with concentrations in Arts and Education.

The authors have appeared on CNN, MSNBC, NBC’s “Today Show,” “Entertainment Tonight” and “The View,” and been covered in newspapers and magazines across the country, including: the New York Times, the Washington Post, USA Today, the Philadelphia Inquirer, the Los Angeles Times, Chicago Tribune, TIME, Newsweek, Town & Country and Harper’s Bazaar.

Topics: Building & Sustaining a Brand, Entrepreneurship, The Business of Writing Bestsellers, The Craft of Social Satire, and The Art of Collaboration.

To request Emma McLaughlin and Nicola Kraus to speak at your next event, contact:
Robinson Speakers | The Gold Standard For Keynote Speakers
646-504-9849 | info@robinsonspeakers.com 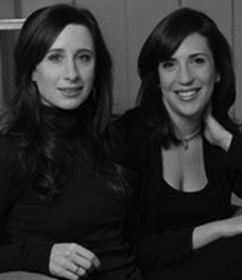