Kevin O’Leary’s impressive reputation has been built upon his entrepreneurial vision, investment smarts and drives to succeed. In addition to being one of the Dragons, O’Leary is the co-host of BNN’s SqueezePlay, the host of BNN’s O’Leary Live, and a ‘Shark’ on the ABC show, Shark Tank. He is also chosting the CBC News world’s business show, Lang & O’Leary Exchange, Chairman of O’Leary Funds, and the chairman of the investment committee of Boston’s 107 year old Hamilton Trust.

Born in Montreal, O’Leary is the son of a United Nations ILO official, which contributed greatly to his diverse cultural and educational experiences. He was educated in countries around the world, and he received an Honours Bachelor’s degree in Environmental Studies and Psychology from the University of Waterloo. In 1980, O’Leary earned his MBA from the University of Western Ontario. In 1986, O’Leary co-founded SoftKey Software Products, and by the late 1990s, SoftKey had acquired numerous competitor companies including Compton’s New Media, The Learning Company, Mindscape and Broderbund. In 1999, the company was sold to the Mattel Toy Company for $3.7 billion, which is one of the largest deals ever done in the consumer software industry.

O’Leary became co-investor and a director in Storage Now, and in 2007, he joined the advisory board of Genstar Capital LLC. As a self-proclaimed “Eco-preneur” O’Leary’s focus is on investments that make money and are environmentally friendly. He is the founding investor and director of Stream Global, and is currently working as the entrepreneur/investor co-host for the Discovery Channel’s, Discovery Project Earth, a new program that explores innovative ways man could reverse global warming.

O’Leary has developed a cult following among financial professionals and smart investors with his pull-no-punches look at the good, the bad and the ugly with respect to the markets and investment opportunities. Within his various television roles, his opinionated nature has won over millions, and he continues to impress with his audiences with professional tips and personal anecdotes. In addition to serving on the executive board of The Richard Ivey School of Business at the University of Western Ontario, O’Leary is a member of the investment committee of Boston’s Hamilton Trust and an investor and director of EnGlobe.

To request Kevin O’Leary to be a speaker at your next event, contact:
Robinson Speakers Bureau | The Gold Standard For Keynote Speakers
+1 646-504-9849 | info@robinsonspeakers.com 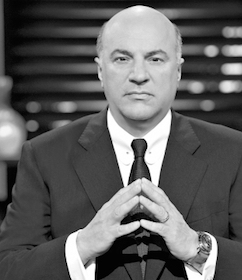