Anderson Cooper is a brilliant political speaker and current affairs speaker. He anchor Anderson Cooper 360° on CNN, a newscast on nightly that goes beyond the headlines – keeping policy makers and politicians honest using in-depth investigations and reporting. Cooper also anchors AC360° Later – an informed and thought-provoking panel that is focused on current events.

Anderson Cooper’s career started in 1992, and since then he has covered practically every major headline grabbing news event around the world, often reporting live from the scene. Most recently, he has extensively covered the bloody and tragic conflicts in Syria and Egypt, the NSA surveillance programs, the Boston Marathon bombing, and the Sandy Hook shootings.

It would be fair to say that Anderson Cooper has also played a pivotal role in CNN’s political and election coverage, right from the front-line, moderating several presidential debates. In 2012 in October, Anderson Cooper moderated the Republican debate live from Las Vegas for CNN.

Cooper is also a frequent correspondent for CBS’s 60 Minutes.

To request Anderson Cooper to be a speaker at your next event, contact:
Robinson Speakers Bureau | The Gold Standard For Keynote Speakers
+1 646-504-9849 | info@robinsonspeakers.com 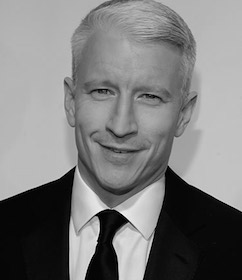