Writer, social entrepreneur, advocate, activist and veteran of the United States Army and the Iraq War

He’s built a world-renowned social impact business that began in his studio apartment with only his personal credit card and a MySpace page. He’s been fearlessly leading America during some of our most important times and created multi-million dollar advertising campaigns and impact partnerships with companies ranging from Google to Southwest Airlines to Uber.

Rieckhoff is a sought-after public speaker and moderator who’s drawn audiences in community’s ranging from The Pentagon to Wall Street to Silicon Valley. He regularly testifies before Congress is a regular on Morning Joe, Fox News and MSNBC and has appeared on hundreds of television and radio shows ranging from Real Time with Bill Maher to The Colbert Report to Meet The Press to Fox’s The Kelly File.

Rieckhoff has personally trained over 200 veteran leaders to be “changemakers” in their communities by getting involved, taking action and making positive change. Rieckhoff’s mantra is “adapt, improvise and overcome” and he and IAVA are showing the world what American ingenuity, leadership and innovation are all about.

In August 2011, Rieckhoff appeared on the cover of TIME magazine. He is an Ashoka Fellow and a member of the Council on Foreign Relations. Rieckhoff’s honors include: GQ’s “50 Most Powerful People in D.C.”, Esquire magazine’s “America’s Best and Brightest,” Rolling Stone’s “The Quiet Ones: 12 Leaders Who Get Things Done,” Penthouse Magazine’s Annual “Badass List” and The Hill’s “Top Lobbyists 2014: Grassroots.” In 2014, Rieckhoff was awarded a “Teddy Award” by TIME magazine for his political courage in demanding VA reform throughout years of scandal noting, “Paul Rieckhoff of Iraq and Afghanistan Veterans of America has been an edgy, controversial figure in recent years, a creative critic of the Department of Veterans Affairs. The revelation of widespread corruption and incompetence in the VA, and the dismissal of Secretary Eric Shinseki, proved the value of Rieckhoff’s persistence. His willingness to take flak for his brothers and sisters in arms merits a Teddy.” Most recently, Task and Purpose named Rieckhoff to its “Mighty 25 Veterans Poised to Make a Difference.”

To request Paul Rieckhoff to speak at your next event, contact:
Robinson Speakers | The Gold Standard For Keynote Speakers
646-504-9849 | info@robinsonspeakers.com 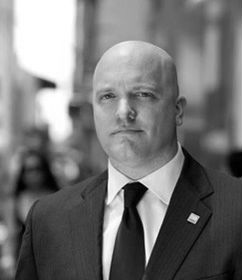