A “players-first” coach with a penchant for helping people reach their dreams, John Calipari, a Naismith Memorial Basketball Hall of Famer, has guided six teams to the Final Four, led one to a national championship and helped 42 players earn selection in the NBA Draft during his 25-year college coaching career.

From UMass to Memphis and now Kentucky, Calipari’s career has been successful throughout, but his most recent run in Lexington has been the best stretch of his career.

In advancing to the 2015 Final Four, Coach Cal became one of just three coaches all-time to make four Final Fours in a five-year span, joining Mike Krzyzewski and John Wooden as the other coaches to achieve that feat. Twice at UK (in 2012 and in 2015) his teams have won 38 games, tying his 2008 Memphis team for the most wins in college basketball history.

As someone who prides himself on helping young men fulfill their dreams, Calipari has helped 42 players earn selection in the NBA Draft during his college coaching career, including 31 over his first eight seasons at Kentucky. The 31 picks over that eight-season span is 14 more than the next closest coach.

At the end of the 2014-15 season, Calipari became the 96th coach to join the Naismith Memorial Basketball Hall of Fame, considered to be one of the ultimate achievements in the game.

Calipari is also quite the philanthropist. His foundation, The Calipari Foundation, has raised millions of dollars to help the lives of those in need in the Commonwealth and across the country, and in 2010, he used a telethon to raise more than $1 million for victims of the devastating earthquake in Haiti. He followed that up with another telethon in 2012 that raised $1 million for victims of Superstorm Sandy.

Calipari’s foundation has also worked with and donated money to Samaritan’s Feet, the West Liberty Recovery Fund, 4 Paws for Ability, the Starkey Hearing Foundation, the Urban League of Lexington and the V Foundation. Calipari has also headed up the EverFi Financial Literacy Program, which teaches students across Kentucky the importance of money management.

Author of five books, including the New York Times Best Seller Players First: Coaching from the Inside Out, Calipari is a master of communication and maximizing talent. He lives by the motto “that it’s never a matter of how far you have fallen, but instead it’s about how high you bounce back.”

Calipari and his wife, Ellen, have two daughters, Erin and Megan, and a son, Bradley.

To request John Calipari to be a guest speaker at your next event, contact:
Robinson Speakers Bureau | The Gold Standard For Speakers
+1 646-504-9849 | info@robinsonspeakers.com 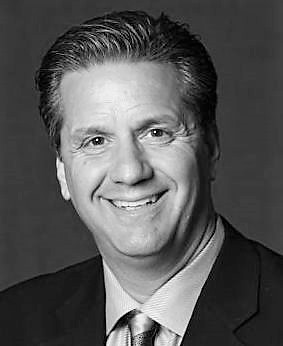