Head of the Biomechatronics Research Group at MIT

Dr. Hugh Herr, a double amputee after a rock climbing accident, now heads the Biomechatronics research group at the MIT Media Lab. He is creating bionic prostheses that emulate natural limbs—and are having a dramatic impact on eliminating disabilities and empowering people. The “Leader of the Bionic Age” according to TIME magazine, his work in the emerging field of biomechatronics—technology that marries human physiology with electromechanics—is revolutionizing the way we approach human limitations. He is responsible for breakthrough advances in bionic limbs that augment human strength, endurance, and agility and provide new hope to those with disabilities.

In presentations, Herr uses inspiration and humor as he shares his story and creates a powerful message that is both personal and applicable to organizations. With insights on innovation, technology, and human possibility, he speaks from firsthand experience in creating breakthrough advancements that help people overcome adversity. An incredible presenter and repeat TED speaker, Herr’s story of overcoming his own tragedy is highly inspirational and his insights on innovation, technology, and the future of the human body are out of this world.

Innovating The Way Out Of Tragedy. Herr’s lab not only creates bionic limbs; he wears them himself. He had been considered a rock climbing prodigy until his legs were amputated after he got frostbite during a rock climbing accident. With the idea that the strength of the body is its malleability, he created special limbs to help him return to climbing—and to be better than he had been before. This extraordinary accomplishment made him the first person in history with a major amputation to compete at an elite level against persons with normal physiologies. “At the time, I didn’t view my body as broken. I reasoned that a human being can never be broken,” he said. “I thought: Technology is broken…This powerful idea was a call to arms to advance technology to the elimination of my own disability, and ultimately the disabilities of others.”

Incredible Accolades. Herr is the author and co-author of more than 80 peer-reviewed manuscripts and patents, chronicling the science and technology behind his many innovations. These innovations include the computer-controlled artificial knee (named one of TIME magazine’s “Top 10 Inventions” in 2004), active leg exoskeletons, and powered ankle-foot prostheses, which mimics the action of a biological ankle and, for the first time, provides transtibial amputees with a natural gait. It was also named to TIME’s “Top Inventions” list in 2007. That same year, Herr was presented with the 13th annual Heinz Award for Technology, the Economy, and Employment.

Herr is the founder and chief technology officer of iWalk Inc., a company that commercializes the BiOM, the world’s first bionic foot and calf system that will emulate or even augment physiological function through electromechanical replacement. Today, the BiOM has been clinically shown to be the first leg prosthesis in history that allows amputees to walk with normal levels of speed and metabolism – as if their legs were biological once again. Herr’s story has been told in the biography Second Ascent, The Story of Hugh Herr; a 2002 National Geographic film, Ascent: The Story of Hugh Herr; and features in CNN, the Economist, Discover, and Nature.

To request Hugh Herr to be a speaker at your next event, contact:
Robinson Speakers Bureau | The Gold Standard For Keynote Speakers
+1 646-504-9849 | info@robinsonspeakers.com 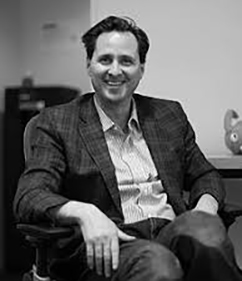