Gary Vaynerchuk is known as the “King of Social Media,” and is one of the first Facebook users that maxed-out his friend limit, with over 17,000 requests pending. He also has close to a million followers on Twitter and was included in BusinessWeek’s list of the top 20 people every entrepreneur should follow. He has been the keynote speaker at notable events such as the 2009 South by Southwest Interactive conference and the New Media and Web 2.0 expos. Vaynerchuk is regularly asked to consult on social media for some of the world’s largest and most recognizable companies like Google and Domino’s. As a result of his social media expertise, Vaynerchuk recently landed a 10-book deal with HarperStudio. The first title, Crush It! Why Now Is The Time To Cash In On Your Passion launched in October 2009. The book maps out Vaynerchuk’s road rules for how to “Crush It” in today’s business market by following your passion and building your own personal brand.

Gary Vaynerchuk is a 35 year old self-trained wine and social media expert who has revolutionized the wine industry. Vaynerchuk is the Director of Operations of the Wine Library, his parents’ 3-story, New Jersey-based wine store. His webcasts attract over 90,000 viewers each day and his email queue typically holds 1,000 messages from die-hard fans, self-named “Vayniacs”. Vaynerchuk’s cult-like following is the result of his unconventional, often irreverent commentary on wine, combined with his business acumen and foresight to use social media tools like Twitter, Facebook and YouTube to reach an untapped audience. Recently, Vaynerchuk’s podcast became the most downloaded show on iTunes in the Food category, beating out venerable names in the industry including Martha Stewart and Jamie Oliver.

Gary Vaynerchuk has been an entrepreneur for as long as anyone close to him can remember. While most eight year olds were learning how to properly squeeze a lemon, he was managing seven lemonade stands across his neighborhood in Edison NJ. When he turned twelve, Gary set his sights on the local mall, where he became something of a legend selling baseball cards on weekends. In high school he joined the family business, a liquor store called Shoppers Discount Liquors that his father had started. It wasn’t long before he became obsessed with collecting wine.

In 1997, Vaynerchuk began to recognize the importance of e-commerce; shortly thereafter, WineLibrary.com was born. He used the site to grow the store from a $3 million business to a $45 million business, and it was just the beginning. Armed with a Flipcam and a NY Jets bucket, he started Wine Library TV in 2006 to share his knowledge and passion for wine with a community that desperately needed a fresh voice. It wasn’t long before 100,000 people were watching Gary Vaynerchuk’s videos every day (shout-out to the Vayniacs – love you guys).

In the spring of 2009, his brother AJ and Gary launched VaynerMedia, a new breed of agency that would help Fortune 500 companies like GE, PepsiCo, Green Mountain Coffee, the NY Jets, and the Brooklyn Nets find their social voices and build their digital brands through micro content and other story telling actions. The idea took hold – what started as a 6-person project 4 years ago swelled to a 250-strong team spread across the country.

When Gary isn’t spending time with his family, he shares the experiences in business with people around the world through keynote speeches.

“I just wanted to let you know that Gary was amazing at our Symposium last week. It was the best guest speaker we have ever had at an event. People are still talking about it. He was so sincere and engaging with every person who approached him.”
— Sitecore

“It was amazing. I have had much of the audience tell me Gary was the best outside speaker over the two days. He ‘crushed it!'”
— VP North America Merchandising, Nike

“Gary was great. He provides a fresh counterpoint to the majority of speakers out there.”
— Salesforce.com

To request Gary Vaynerchuk to be a guest speak at your next event, contact:
Robinson Speakers Bureau | The Gold Standard For Speakers
+1 646-504-9849 | info@robinsonspeakers.com

**Brought to you in partnership with CAA 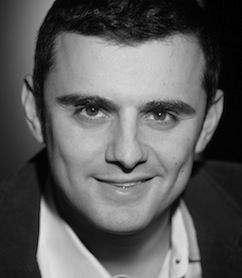