Winston Lord currently serves as Chairman Emeritus of the International Rescue Committee, the largest non-sectarian organization that both helps refugees abroad and resettles them in the United States. The IRC operates in some 40 countries and 25 American cities. Lord has had a long career of bipartisan service in the U.S. government and the private sector.

For four decades Ambassador Lord has been at the center of U.S.China relations. As Special Assistant to the National Security Advisor he accompanied Henry Kissinger on his secret visit to China and President Nixon on his historic opening in the early 1970’s, as well as subsequent trips by President Ford and Dr. Kissinger. From 1985-1989 he served as Ambassador to Beijing under Presidents Reagan and Bush. From 1993-1997 he was Assistant Secretary of State in charge of all East Asian policy, including China, under President Clinton.

Lord was the State Department Director of Policy Planning 1973-1977. He served in a variety of assignments in the Defense Department and the Foreign Service in the 1960’s.

Between governmental posts Ambassador Lord has headed and helped direct a variety of private organizations related to international affairs. He was President of the Council on Foreign Relations in 19771985. In the early 1990s he was Chairman of the National Endowment for Democracy and Chairman of the Carnegie Endowment National Commission on America and the New World.

He is married to the international best-selling author Bette Bao Lord and they are the parents of Elizabeth and Winston.

To request Winston Lord to speak at your next event, contact:
Robinson Speakers | The Gold Standard For Keynote Speakers
646-504-9849 | info@robinsonspeakers.com 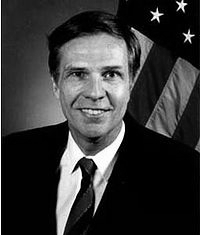