Watts Wacker is one of the most celebrated and influential minds in modern business: lecturer, best- selling author, political commentator and – one of the world’s most respected futurists since 1986. By embracing the essence of being and becoming, his unique ability to question the past, future and present has made him a world-renowned professional speaker, consultant and futurist for the past 30 years.

His uncommon versatility and vision have allowed him to consult the world’s top corporations and organizations to navigate the sea of change that is taking hold in the new millennium. Watts was the Futurist at SRI International (the legendary Menlo Park think tank) and spent 10 years as the resident Futurist at Yankelovich Partners. He is heralded as one of the best storytellers alive today.

Watts Wacker’s unique approach to business, life and its future has been chronicled in such publications as Fast Company, Forbes, Upside, The Los Angeles Times, The Chicago Tribune, The London Telegraph, The Financial Times and many European and Asian publications. He is often seen on television and is considered a “must quote” by the Associated Press. Mr. Wacker received degrees from both Tulane University and The University of Texas in Austin. He has lectured at many colleges and universities, most recently Dartmouth, Columbia, USC and BA/Norway. Watts Wacker resides in Westport, Connecticut with his wife and partner of 28 years and their two children.

To request Watts Wacker to be a speaker at your next event, contact:
Robinson Speakers Bureau | The Gold Standard For Keynote Speakers
+1 646-504-9849 | info@robinsonspeakers.com 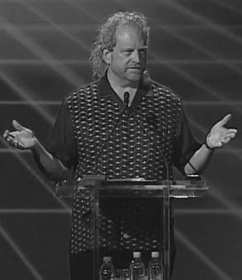