Tiffany Shlain – filmmaker, artist, founder of The Webby Awards, and co-founder of the International Academy of Digital Arts and Sciences

Named one of Newsweek’s “Women Shaping the 21st Century,” and selected by the Albert Einstein Foundation for their new book: Genius: 100 Visions for the Future, Tiffany Shlain is an Emmy-nominated filmmaker, founder of the Webby Awards, and dynamic speaker known for her visually stimulating, big picture, provocative, inspiring, and engaging keynotes. With clips from her films in the background, Tiffany brings audiences on a ride that will make them think, laugh, and connect in a way that will bring audiences to their feet.

She has received over 80 awards and distinctions for her films and work, and has premiered four films at Sundance, including her acclaimed feature documentary Connected: An Autoblogography about Love, Death & Technology which The New York Times hailed as “examining everything from the Big Bang to Twitter,” “incredibly engaging.” The US State Department has also selected four of Shlain’s films, including Connected, to represent the U.S. at embassies around the world to foster dialogue across borders. Her Original series The Future Starts Here was nominated for an Emmy Award in New Approaches: Arts, Lifestyle, Culture and has over 40 million views to date. Her recent films Shlain’s films and lectures employ her signature style of fast-paced images, colorful animations, and daring and humorous insights to encourage us all to think about where we’re headed in our increasingly connected world.

Tiffany has co-founded two global initiatives, Character Day and 50/50 Day — unified days of film and discussion about important issues shaping our lives that unite over 100,000 live events all linked together online with speakers and one theme. Character Day explores questions and research around living a life of meaning and purpose with her films 30,000 Days and The Science of Character as the centerpiece. 50/50 Day focuses on gender equity, using her film 50/50: Rethinking the Past, Present & Future of Women + Power.

Tiffany was the on-air Internet expert on ABC’s Good Morning America with Diane Sawyer, is a Henry Crown Fellow of The Aspen Institute, is an advisor to The Institute for the Future, and was invited to advise Secretary of State Hillary Clinton about the Internet and technology. As a world-renowned speaker, Tiffany has been featured at institutions including Google, Harvard, NASA, and Fortune 500 companies. She has contributed articles for Harvard Business Review, Documentary Magazine and was listed by Indiewire & FastCompany for her insights on twitter. TED Conferences published her first book, Brain Power: From Neurons to Networks, which launched simultaneously with the premiere of her 10 minute film of the same name.

Tiffany publishes a quarterly newsletter, Breakfast @ Tiffany’s, where she has highlighted the best in media and ideas since 1998. She runs an independent film studio + lab in San Francisco and lives in Northern California with her husband/collaborator Ken Goldberg (an artist & professor of robotics at UC Berkeley) and their two children.

While an advocate for technology and a thought-leader on the relationship between technology and humanity, Tiffany and her family are on their 8th year of unplugging for 24 hours each week as part of their “technology shabbats,” a topic she explores in her writing, keynotes, and films.

To request Tiffany Shlain to be a speaker at your next event, contact:
Robinson Speakers Bureau | The Gold Standard For Keynote Speakers
+1 646-504-9849 | info@robinsonspeakers.com 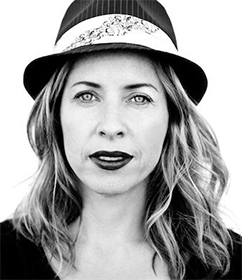