Sugar Ray Leonard is one of the legendary sports icons of the 20th century whose very name epitomizes boxing and conjures the image of a champion.

In 1977, at the age of twenty, Leonard won his first professional fight, setting the stage for a collection of the most memorable fights in history. During his twenty-year professional career, Leonard also won world titles in the welterweight, junior middleweight, super middleweight, and light heavyweight divisions. He was the first boxer to win world titles in five different weight classes.

Leonard published his first autobiography (Viking Books) entitled THE BIG FIGHT: My Life In and Out of the Ring on June 7, 2011. In this unflinching and inspiring autobiography, the boxing legend faces his single greatest competitor: himself. With honesty, humor, and hard-won perspective, Leonard comes to terms with both triumph and struggle-and presents a gripping portrait of remarkable strength, courage, and resilience, both in and out of the ring.

Leonard was host and mentor for the first, second and third seasons of the critically-acclaimed series, Contender, on NBC & ESPN. Contender was produced by DreamWorks Television and Mark Burnett Productions. He appeared in the critically acclaimed Paramount Pictures feature film “The Fighter” and served as a consultant on DreamWorks and Walt Disney Pictures’ hit film “Real Steel.” Leonard is currently co-hosting Prime Time Boxing, PBC on NBC, with Al Michaels, Marv and Kenny Albert, Kenny Rice, BJ Flores, and Liam McHugh.

Leonard’s sincere, charismatic personality coupled with his ring experience led to a successful career as a television broadcaster for NBC, ABC, HBO and ESPN. His television credits also include competing on the hit ABC series, “Dancing with the Stars”. In addition, his celebrity status and tremendous cross-over appeal fostered commercial endorsement relationships with numerous companies including EA Sports, Vartec Telecom, Track Inc., Ford, Carnation, 7-Up, Nabisco, Coca-Cola, and Revlon.

Leonard is also among the most sought after motivational/inspirational speakers in the world today. His speech, titled “POWER” (Prepare, Overcome, and Win Every Round), is consistently booked with major Fortune 500 companies in the United States and abroad.

Sugar Ray Leonard has a passion to help fund research and awareness for type 1 & 2 diabetes and obesity prevention. In 2009, Leonard and his wife Bernadette started the Sugar Ray Leonard Foundation and have been supporting the life-changing programs at the Center for Endocrinology, Diabetes, & Metabolism at Children’s Hospital Los Angeles.

Leonard has four children and lives in Southern California with his wife Bernadette.

To request Bob Gower to be a guest speaker at your next event, contact:
Robinson Speakers Bureau | The Gold Standard For Speakers
+1 646-504-9849 | info@robinsonspeakers.com 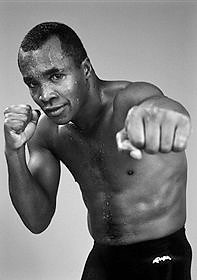