Tapping into hard-hitting recent history, Lee produced When the Levees Broke, the groundbreaking first documentary that followed the plight of Americans stranded in New Orleans after Hurricane Katrina, and its Peabody Award-winning sequel, If God’s Willing and da Creek Don’t Rise, which revisits the storm-ravaged Gulf Coast region as residents attempt to rebuild their cities while also demanding assistance and accountability from their political leaders. Going further back in time, he also produced the Emmy- and Oscar-nominated documentary 4 Little Girls, a grisly account of the terrorist bombing of an African American church during the Civil Rights Movement.

Lee’s other films include Miracle at St. Anna, which follows four members of the all-black 92nd “Buffalo Soldier” Division in the US army trapped behind enemy lines in Tuscany during World War II; Kobe – Doin’ Work, a one-day, 18-camera documentary shoot focusing on NBA standout Kobe Bryant of the Los Angeles Lakers; Girl 6; Get on the Bus; Do the Right Thing; and Clockers, among many more. His most recent work is the feature film Red Hook Summer, which premiered at the Sundance Film Festival in January 2012.

Spike Lee’s movies are a series of outspoken and provocative socio-political critiques that challenge our cultural assumptions not only about race but also class and gender identity. He has not only solidified his own standing as one of contemporary cinema’s most influential figures but also revolutionized the role of black talent in Hollywood, tearing away decades of stereotypes and marginalized portrayals to establish a new arena for African American voices to be heard.

To request Spike Lee to speak at your next event, contact:
Robinson Speakers | The Gold Standard For Keynote Speakers
646-504-9849 | info@robinsonspeakers.com 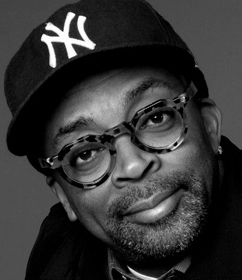