As founder of the Grameen Movement, Professor Muhammad Yunus is a revolutionary. His ideas couple capitalism with social responsibility and have changed the face of rural economic and social development forever.

Professor Yunus is responsible for many innovative programs benefiting the rural poor. In 1974, he pioneered the idea of Gram Sarker (village government) as a form of local government based on the participation of rural people. This concept proved successful and was adopted by the Bangladeshi government in 1980. In 1978, he received the President’s award for Tebhaga Khamar (a system of cooperative three-share farming, which the Bangladeshi government adopted as the Packaged Input Program in 1977).

A Fulbright Scholar at Vanderbilt University, Professor Yunus received his Ph.D. in Economics in 1969. Later that year, he became an assistant professor of Economics at Middle Tennessee State University, before returning to Bangladesh where he joined the Economics Department at Chittagong University.

The UN secretary general appointed Professor Yunus to the International Advisory Group for the Fourth World Conference on Women in Beijing from 1993 to 1995. Professor Yunus has also served on the Global Commission of Women’s Health (1993-1995), the Advisory Council for Sustainable Economic Development (1993-present), and the UN Expert Group on Women and Finance. He also serves as the chair of the Policy Advisory Group (PAG) of Consultative Group to Assist the Poorest (CGAP). Yunus has also served on many committees and commissions dealing with education, population, health, disaster prevention, banking, and development programs. He is currently on the boards of many international organizations including Amanah Ikhtiar Malaysia (a Grameen replication project), the International Rice Research Institute in the Philippines, and Credit and Savings for the Poor in Malayasia. Professor Yunus also sits on the board of the Calvert World Values Fund, the Foundation for International Community Assistance, the National Council for Freedom From Hunger, RESULTS and the International Council of Ashoka Foundation, all of which are located in the US.

Professor Yunus has received the following International awards: the Ramon Magsaysay Award (1984) from Manila; the Aga Khan Award for Architecture (1989) from Geneva; the Mohamed Shabdeen Award for Science (1993) from Sri Lanka; and the World Food Prize by World Food Prize Foundation (1994) from the US. Within Bangladesh, he has received the President’s Award (1978), Central Bank Award (1985), and the Independence Day Award (1987), the nation’s highest award.

To request Muhammad Yunus to speak at your next event, contact:
Robinson Speakers | The Gold Standard For Keynote Speakers
646-504-9849 | info@robinsonspeakers.com 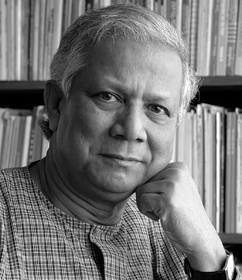