Mike Huckabee was the 44th Governor of Arkansas from 1996 until 2007, becoming one of the longest serving Governors in his state’s history, and only the 4th Republican elected to any statewide office since Reconstruction. He served longer than the other three Republican-elected officials combined. He left a legacy of tax cuts, job creation, the reconstruction of his state’s road system, K-16 education reform, and a nationally heralded and duplicated health initiative that focused on the less expensive approach of prevention than the costly big-government approach of intervention. His administration fought long-standing corruption in the state’s political machine, resulting in numerous indictments and convictions of powerful legislators and other elected officials.

Huckabee had been Lieutenant Governor for 3 years in July 1996 when his predecessor was forced to resign due to felony convictions. He was one of the youngest governors in the country at the time. He was elected to a full four-year term as governor in 1998, attracting the largest percentage of the vote ever received by a Republican gubernatorial nominee in Arkansas, and was re-elected to another four-year term in November 2002.

Former Arkansas governor Mike Huckabee is currently the host of the number one rated weekend show HUCKABEE on the Fox News Channel. He’s also heard three times daily across the nation on The Huckabee Report syndicated on almost 600 stations.

He is a New York Times Bestselling author of 11 books, and his 12th is set for release in January of 2015. In his campaign for the Republican nomination for President in 2008, he finished second to John McCain. His political action committee, HuckPac has amassed a volunteer team with thousands of activists in all 50 states.

Governing magazine named him as one of its ‘Public Officials of the Year’ for 2005, and Time Magazine honored him as one of the five best governors in America. He has been honored by numerous organizations for his commitment to music education. He served as the Chairman of the prestigious National Governors Association, as well as the Education Commission of the States, the Southern Governors Association, and the Interstate Oil and Gas Commission.

Huckabee, an avid musician since age 11, is a bass guitar player. He is often featured in the musical segment of his FOX TV show. His hobbies include hunting, fishing, and music. He was named one of the 25 Most Influential People for Conservation by Outdoor Life magazine, and was named Man of the Year by the American Sportfishing Association in 1997. The former governor and his wife, Janet, live in Florida and still spend part of their time in Arkansas. They have three grown children: John Mark, David and Sarah and four grandchildren.

To request Mike Huckabee to speak at your next event, contact:
Robinson Speakers | The Gold Standard For Keynote Speakers
646-504-9849 | info@robinsonspeakers.com 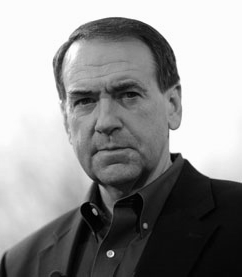