Continuing the Work of Albert Einstein

Michio continues Einstein’s search for a “Theory of Everything,” seeking to unify the four fundamental forces of the universe—the strong force, the weak force, gravity and electromagnetism.

He is the author of several scholarly, Ph.D. level textbooks and has had more than 70 articles published in physics journals, covering topics such as superstring theory, supergravity, supersymmetry, and hadronic physics.

Professor of Physics — He holds the Henry Semat Chair and Professorship in theoretical physics at the City College of New York (CUNY), where he has taught for over 25 years. He has also been a visiting professor at the Institute for Advanced Study at Princeton, as well as New York University (NYU).

To request Michio Kaku to speak at your next event, contact:
Robinson Speakers | The Gold Standard For Keynote Speakers
646-504-9849 | info@robinsonspeakers.com 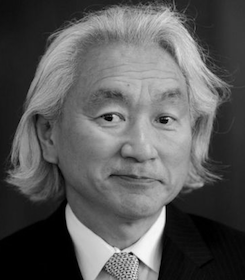