Chairman & CEO of SalesForce.com, Named One of the Best CEO’s in the World by Barron’s

Marc Benioff is chairman and CEO of salesforce.com. He founded the company in 1999 with a vision to create an on-demand information management service that would replace traditional enterprise software technology. Benioff is now regarded as one of the pioneers of cloud computing and has been instrumental in driving businesses to transform into customer companies by embracing social and mobile cloud technologies to connect with customers, partners, employees and even products in new ways.

Under Marc Benioff’s direction, salesforce.com has grown from a groundbreaking idea into a publicly traded company that is the leader in enterprise cloud computing. For its revolutionary approach, salesforce.com has been recognized by Fortune as one of the Fastest Growing Companies, the World’s Most Admired Computer Software Company and one of the Best Places to Work. In addition, the company was selected by Forbes as the World’s Most Innovative Company for three years in a row.

Throughout his career, Marc Benioff has been committed to using information technology to produce positive social change. In 2000, he launched the Salesforce.com Foundation—now a multimillion-dollar global organization—which established the “1-1-1 model,” whereby the company contributes one percent of product, one percent of equity, and one percent of employee hours back to the communities it serves. Acknowledging his commitment to building partnerships between business and society to improve the state of the world, the members of the World Economic Forum named Benioff as one of its Young Global Leaders and the Committee Encouraging Corporate Philanthropy presented Benioff with the coveted Excellence in Corporate Philanthropy Award.

Benioff serves on the Board of Trustees at the University of Southern California and is on the board of directors at Cisco. Benioff is also the author of three books, including the national best seller Behind the Cloud.

Prior to launching salesforce.com, Marc Benioff, a 30-year veteran of the software industry, spent 13 years at Oracle Corporation from 1986-1999. In 1984, he worked as an assembly language programmer in Apple Computer’s Macintosh Division. He founded entertainment software company Liberty Software in 1979 when he was 15 years old. Benioff received a Bachelor of Science in Business Administration from the University of Southern California in 1986.

To request Marc Benioff to speak at your next event, contact:
Robinson Speakers | The Gold Standard For Keynote Speakers
646-504-9849 | info@robinsonspeakers.com 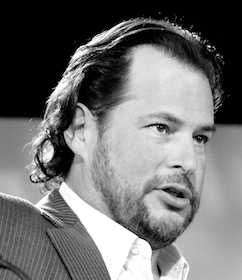