Joe Simpson is a leading author and motivational speaker. His story of survival is a modern-day classic. “Touching The Void” has sold over 2 million copies worldwide in 22 languages, and became the most successful documentary in the history of British cinema.

In 1985, Joe Simpson attempted a first-ascent of the previously unclimbed West Face of Siula Grande – the highest peak in the Peruvian Andes. Several teams had tried and failed to climb the 20,000 foot summit. However, Simpson, with his partner Simon Yates, were successful. But after reaching the top they descended via the difficult North Ridge, where disaster struck.

Joe Simpson slipped down an ice cliff and landed awkwardly, smashing his tibia into his knee-joint, and shattering his left leg. They had no food or access to water, and the wind chills were reaching minus 50 degrees. Both men had frost-bitten hands and hypothermia. But instead of leaving Joe to die, Yates tried to save him, and began to lower Simpson down the mountain with ropes.

Storm conditions worsened. Daylight was faded. Yates inadvertently lowered Simpson off a cliff, and the rope jammed in the pulley, leaving both men unable to move, with Joe Simpson dangling above the glacier, Yates gripping the line. They remained in this position for several hours, but Yate’s could not hold on. He had little choice but to cut the rope. Simpson fell fifty feet into a deep crevasse, and vanished without a trace. After searching for hours, Yates was forced to descend the mountain alone.

However, Joe Simpson was still alive. When he regained consciousness, he either had to save himself, or die up on that mountain all alone. Simpson’s survival is widely regarded as one of the most courageous pieces of mountaineering lore ever told.

He now brings his powerful stories to the corporate sector to provide motivation for any business audience. He has a reputation on the speaking circuit which is second to none. Joe has been interviewed on Hardtalk, Letterman and Oprah.

To request Joe Simpson to speak at your next event, contact:
Robinson Speakers | The Gold Standard For Keynote Speakers
646-504-9849 | info@robinsonspeakers.com 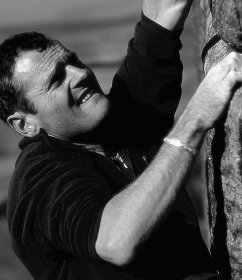