Jim Rogers is an author, investor, and biker. His best selling books have been featured in Time, The New York Times, Forbes, and The Wall Street Journal, among other publications.

In the 1960’s, Rogers won a scholarship to Yale, where he became the coxswain on the crew team. Toward the end of his four years there, he received an academic scholarship to Oxford, where he attended Balliol College and studied politics, philosophy, and economics. He also became the first person from Demopolis ever to cox the Oxford-Cambridge Boat Race. It was during the summer of 1964, while working for Dominick & Dominick, that Rogers fell in love with Wall Street. And that’s exactly where he headed.

After apprenticing with Arnhold and S. Blichroeder in the early 1970s, Rogers co-founded one of the most famous funds in finance, which made an unprecedented 4000% gain over the following ten years, while the S&P rose less than 50%. Rogers then decided to retire at age 37. However, he didn’t remain idle.

Rogers kept busy serving as a professor of finance at the Columbia University Graduate School of Business, and, in 1989 and 1990, as the moderator of WCBS’s “The Dreyfus Roundtable” and FNN’s “The Profit Motive with Jim Rogers”.

At the same time, he was laying the groundwork for an around-the-world motorcycle trip, and on New Year’s Day 1991 in an Icelandic blizzard, Jim Rogers and his fiancée started out on their epic journey – a journey that would take them 152,000 miles through 116 countries in three years; a feat that landed them in the Guinness Book of World Records. After driving through war zones, deserts, jungles, epidemics and blizzards, narrowly escaping some very dangerous situations and camping with nomads and camels under starlit skies, Jim began to see the real world through his own eyes – economically, politically and socially. A roller coaster ride, Jim’s story takes audiences on a journey where they feel exhilarated, surprised to still be alive, wondering where to go next, and still wanting to hear more.

Once described as the Indiana Jones of finance, Jim Rogers used the trip to seek out new opportunities and make bold conclusions about the global economy and investment strategy. He chronicled his journey in “Investment Biker: On the Road with Jim Rogers.” Rogers showed one nation after the next in which gradually weakening currencies and political structures have suddenly collapsed, resulting in total national ruin. He gets to the heart of what’s driving successful nations and economies upward, and what’s slashing troubled ones downward.

Interested in booking keynote speaker Jim Rogers to speak at your next event?
Contact Robinson Speakers, the Gold Standard For Keynote Speakers.
US +1 (646) 504-9849 | info@robinsonspeakers.com 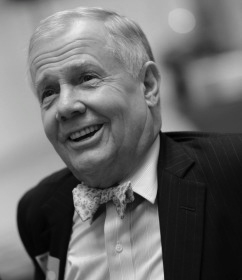