Ed Viesturs is America’s leading high altitude mountaineer, having climbed many of the world’s most challenging summits, including ascending Mount Everest six times. He recently completed a 16-year quest to climb all 14 of the world’s highest mountains (above 8,000 meters) without the use of supplemental oxygen. In doing so, he became the first American and the 5th person in the world to accomplish this. He reached the summit of his 14th peak, Annapurna, on May 12, 2005.

“When I first attempt a Himalayan peak,” Viesturs explains, “I climb without bottled oxygen, even if it keeps me from reaching the summit. My personal goal is to see how I can perform, to experience the mountain as it is without reducing it to my level. For me, how I reach the top is more important than whether I do.

“I’m aware of the tricks that altitude and hypoxia can play on you. While climbing, I test myself, asking myself whether I’m aware of the conditions, of my actions, and of what is around me. ”

“Once climbers are on oxygen,” Viesturs continues, “they become stronger. But it’s a bit of a crutch. Without it, I don’t have a mechanical apparatus that can fail on me and thereby endanger me. The oxygen system is awkward. Sunglasses won’t fit over the mask, so I have to wear goggles, which fog up. Also, I can’t seem to suck enough air fast enough through the valves of the mask — I have to rip it off to take a full breath.

“Most importantly, I’m aware of the tricks that altitude and hypoxia can play on you. While climbing, I test myself, asking myself whether I’m aware of the conditions, of my actions, and of what is around me. Exhaustion and hypoxia can cause one to lose it mentally, and I never allow myself to fall into this state. When I’m guiding, however, I always use oxygen. You’re there for the clients, and oxygen does enable you to function better, both physically and mentally.”

Viesturs was born in 1959 and grew up in the flatlands of Rockford, Illinois, where the highest objects on the horizon were water towers. His parents were immigrants – his father, a mechanical design engineer from Latvia; his mother from Germany – who arrived in the early 1950s. In high school, Viesturs read and was captivated by Annapurna, the French climber Maurice Herzog’s famous and grisly account of the first ascent of an 8,000-meter peak in 1950. I reminded Viesturs that Herzog’s tale had a lot more frostbite, amputation, and near-death suffering than it did fun. “That’s not what interested me,” he replied.

“What I liked was that these guys had a goal and they just wouldn’t give up. They spent months and months finding the mountain; then they climbed it. So simple, so basic. I’m a very goal-oriented person, and I like things that take a long time to accomplish.”

After some beginner’s rock climbing at Devil’s Lake, Wisconsin, Viesturs left the Midwest for the University of Washington in 1977 and inaugurated a long-running obsession with Mount Rainier. “I could see it from my dorm window, and it became my focus,” he says. “I was maniacal about it. Every weekend, I’d bum a ride or hitchhike, rain or shine, just to be on the mountain.”

He eventually landed a job as a guide with Rainier Mountaineering Inc., then began a four-year period combining veterinary studies at Washington State University in Pullman and guiding during the summer. After becoming a vet in 1987, Viesturs practiced in two clinics run by friends who reluctantly gave him months off at a time to climb in the Himalayas. Finally, his absences were too long and too frequent, and he was forced to choose: be a vet or be a climber. He chose the mountains.

To request Ed Viesturs to speak at your next event, contact:
Robinson Speakers | The Gold Standard For Keynote Speakers
646-504-9849 | info@robinsonspeakers.com 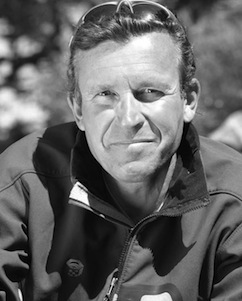