There is no one quite like Chief Petty Officer David Goggins. The Navy SEAL, one of an elite group of military men regularly sent on some of the toughest missions in the world, needed more of a challenge for himself, so he set about conquering the hardest sporting events known to man. Today he is considered to be one of the greatest endurance athletes in the world.

In less than four years, David has completed more than 30 endurance races, including multiple ultra-marathons, triathalons, ultra-triathalons, bike races and arduous mountain ascents, setting new course records and regularly placing in the top five. In 2007, shortly before he was diagnosed with a hole in his heart, he completed 203.5 miles in the 48-Hour National Championship endurance foot race, beating previous records by 20 miles and earning a spot among the top 20 ultra-marathoners of the world. His exceptional achievements made him the subject of a lead feature in Runner’s World, where he was named, “Running Hero.” The Navy even asked him to be their poster boy and appear in a recruiting commercial.

David’s military record alone is astonishing. He is the only member of the U.S. Armed Forces to complete SEAL training (including two Hell Weeks), the U.S. Army Ranger School (where he graduated as Honor Man) and Air Force tactical air controller training. He’s faced combat in Iraq, and served as the body guard for Iraqi Prime Minister Ibrahim al-Jaafari. And those are only the missions he can openly discuss. This modern-day G.I. Joe has been involved in some of the most sensitive deployments in the military, including top secret assignments that can potentially alter the course of international geopolitics and American foreign policy.

But all the awards, medals, accolades and magazine articles mean nothing to David. That’s not why he does what he does. Other than the more than $2 million he’s raised for the Special Operations Warrior Foundation, none of this recognition is relevant to him. He’s not trying to be number one in the world. He’s not interested in how many races he’s run. He doesn’t keep track of the miles he’s gone through. There’s no scoreboard; there’s no finish line.

Instead, it’s all about achieving his personal best and pushing himself well past his comfort zone. David chooses to run the toughest races and put himself through some of the hardest military training programs in the country for no other reason than to test himself and see what he’s made of. For him, physical suffering is a journey of self-discovery, and endurance is a meditation that strengthens his faith and brings him closer to his God. No other experience makes him feel more clear, focused and alive.

To understand what makes this inspirational individual tick, it’s first necessary to know where he comes from. Born in 1975 in Buffalo into an abusive household, David was put to work in his father’s roller rink business from the time he could crawl. From kindergarten to his senior year in high school, he was almost never his class, and the neglected latchkey kid endured every kind of cruelty, from his own father’s psychological and physical abuse, to the rampant racism of small-town Indiana, where he’d been raised by a working single mother since middle school.

Barely graduating with a 1.6 GPA, David was constantly told he was too dumb, too sick or too fat to make it in his chosen military career. In Brazil, Indiana, mere miles from a major KKK stronghold, he was threatened and called the “n-word” almost daily. He struggled with obesity, severe allergies, sickle cell trait and a congenital heart defect. But he never allowed these circumstances to hold him back or make him a victim. He chose to overcome and prove the doubters and naysayers wrong.

It’s why David is such a sought after public speaker to this day. His “no excuses; suck it up” approach has made him a favorite of the talking circuit, and he’s regularly invited to speak at college campuses and business forums, and address top sports teams like the Seattle Seahawks. What his audiences get is a crash course in personal accountability. David is all about owning his failures. For him, today’s norm of coddling, entitlement and blame is simply not acceptable. He’s pure old school, and that’s precisely what makes him one of a rare and extraordinary breed of men.

Interested in booking David Goggins to be a speaker at your next event?
Contact Robinson Speakers | The Gold Standard For Keynote Speakers
US +1 (646) 504-9849 | info@robinsonspeakers.com 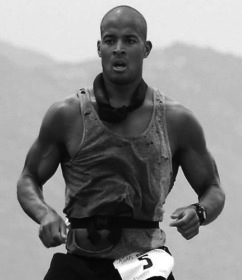