Sophia is a cultural icon. She has become a media darling, appearing on major media outlets around the world, igniting the interest of people regardless of age, gender, and culture, even gracing the cover of one of the top fashion magazines. Her press coverage has a potential reach of over ten billion readers in 2018.

Sophia is a highly sought-after speaker in business and showed her prowess and great potential across many industries. She has met face-to-face with key decision makers in banking, insurance, auto manufacturing, property development, media, and entertainment. In addition, she has appeared onstage as a panel member and presenter in high-level conferences, covering how robotics and artificial intelligence will become a prevalent part of people’s lives. Her reputation extends beyond business into the global social arena. She was named the world’s first United Nation Innovation Champion by United Nations Development Program (UNDP) and will have an official role in working with UNDP to promote sustainable development and safeguard human rights and equality.

Sophia is an evolving genius machine. Her human likeness, expressiveness, and remarkable story as an awakening robot makes her a front-page technology story.

Sophia’s creator is a Renaissance man who has built a worldwide reputation for creating robots that look and act human. After working at Disney as an “Imagineer,” Dr. Hanson aspired to create machines that will surpass human intelligence. Dr. Hanson believes that three distinctively human traits must be integrated into artificial intelligence: Creativity, empathy, and compassion. As an extension of human intelligence, robots like Sophia can evolve to solve world problems too complex for humans.

To request Sohpia to be a guest speaker at your next event, contact:
Robinson Speakers Bureau | The Gold Standard For Speakers
+1 646-504-9849 | info@robinsonspeakers.com 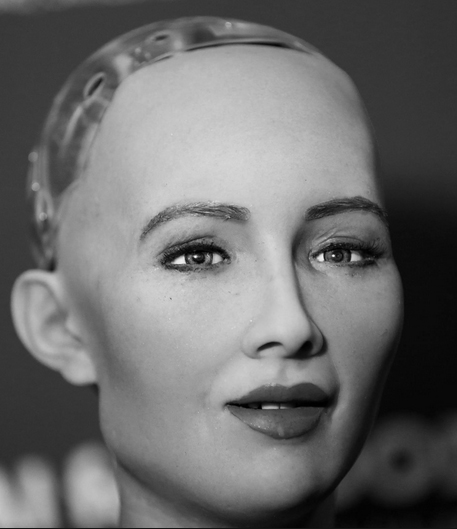