Growing up in Newark, New Jersey, Dr. Sampson Davis was surrounded by poverty, broken families and drug-related crime. He managed to walk the tightrope between being smart and socially acceptable in a rough neighborhood, and he and two childhood friends made a pact that they would all become medical doctors. They all achieved their dream, and Dr. Davis is now a board certified Emergency Medicine Physician.

As well as following his vocation as a physician at St Michael’s Medical Centre in Newark, Dr. Davis is in huge demand as a writer, guest and keynote speaker. He shares his experiences of growing up in the ghetto and his solutions to help the poorest communities break out of the cycle of crime, poverty and drugs.

In his book, Living & Dying in Brick City—An E.R. Doctor Returns Home, Dr. Davis discusses his life as an ER physician and offers his ideas for improving the health of the poorest communities. His previous co-authored books about his and his friends’ dreams of becoming a doctor, The Pact, We Beat the Street, and The Bond, were all New York Times bestsellers. His latest book, co-authored with Sharlee Jeter, is entitled The Stuff: Unlock Your Power to Overcome Challenges, Soar, and Succeed.

Dr. Davis and his two friends have now created the Three Doctors Foundation, a non-profit organization dedicated to free public programs in the realms of health, education, leadership and mentoring. He believes that education is the key to alleviating poverty, and that to do so it must be glorified and glamorized so that young people will be inspired to better themselves.

To request Sampson Davis to be a speaker at your next event, contact:
Robinson Speakers Bureau | The Gold Standard For Keynote Speakers
+1 646-504-9849 | info@robinsonspeakers.com 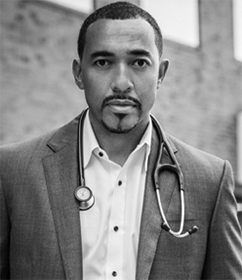