After a distinguished career at the helm of two American orchestras, Roger Nierenberg is now emerging as a creative force for innovation in the presentation of symphonic music. For 14 years, he led the Jacksonville Symphony Orchestra in Florida, where he succeeded in building one of the great concert halls in America, and in securing a prestigious invitation to the Carnegie Hall Series of Great Visiting Orchestras. During his lengthy tenure with the Stamford Symphony, he helped the orchestra develop a reputation as one of the finest in New England. Nierenberg has guest conducted many of America’s most distinguished orchestras and opera companies, has performed at some of the world’s most prestigious music festivals, and has recorded with the London Philharmonic Orchestra on Sony Classical Records. His collaborations with outstanding guest artists and composers have won high praise and have been successful.

Nierenberg has also created the unique experiential learning event called “The Music Paradigm,” in which an orchestra is used as a metaphor for any dynamic organization. With executives seated among musicians, Nierenberg leads a series of exercises, carefully crafted to address the sponsoring organization’s specific issues. It provides a creative framework for rethinking leadership style, philosophies, and effectiveness.

Since its inception in 1995, Nierenberg has conducted “The Music Paradigm” sessions for many major companies, leading financial institutions, and global consulting firms through the US, Europe, Asia, and Latin America. It has been the subject of reports on ABC, CBS, CNN, and PBS and was the sole feature of an hour-long broadcast of the BBC’s Money Programme.

Nierenberg’s “The Music Paradigm” sessions were also the inspiration for his book, Maestro: A Surprising Story About Leading By Listening, a parable about a rising executive tough challenges. The book teaches the importance of empowering individuals, listening, and a clear organizational vision.

To request Roger Nierenberg to speak at your next event, contact:
Robinson Speakers | The Gold Standard For Keynote Speakers
646-504-9849 | info@robinsonspeakers.com 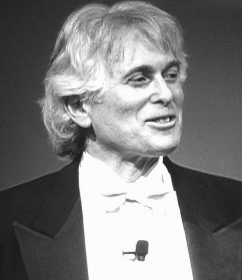