Reilly began his career in 1979 as an undergraduate assistant with the Daily Camera in Boulder, Colorado.[2] He left the Camera in 1981 to be a football writer on the sports staff of the Denver Post, then on to the Los Angeles Times in 1983 before joining Sports Illustrated in 1985.[2] Reilly has become a recognized name in the sportswriting industry because of his human interest pieces; his column, “Life of Reilly” was featured on the back page of SI from 1997 until 2007[2] when he announced that he would leaving Sports Illustrated to join ESPN. The “Life of Reilly” was the first signed opinion piece in SI’s history.[3] By some accounts, during his prime he was considered the “preeminent sportswriter in America”.[4] Reilly officially left SI during the week of November 29, 2007, after 23 years with the magazine.

“Life of Reilly” now appeared in ESPN The Magazine (also the last page) and on ESPN.com. On March 10, Reilly announced that he would no longer be writing his opinion ativan lorazepam column for the magazine, but was going to a regular essay on SportsCenter. Reilly delivers essays from live sporting events for SportsCenter and other ESPN telecasts, such as the U.S. Open, Wimbledon, and the British Open. He is host of “Homecoming”, an interview program, also on ESPN, taped in the hometowns of featured guests. The series launched in April 2009.

On March 12, 2014 he announced his retirement from sports writing, his last column was published on ESPN.com on June 10, 2014. He’ll continue working on ESPN in a television only capacity.

Reilly has been voted NSSA National Sportswriter of the Year eleven times. He is second only to the late Jim Murray of the Los Angeles Times (14) in number of times winning that award. In 2009, he joined a roster of journalism notables as winner of the Damon Runyon Award for Outstanding Contributions to Journalism. His work has also been recognized by the prestigious New York Newspaper Guild’s Page One Award for Best Magazine Story.

To request Rick Reilly to speak at your next event, contact:
Robinson Speakers | The Gold Standard For Keynote Speakers
646-504-9849 | info@robinsonspeakers.com 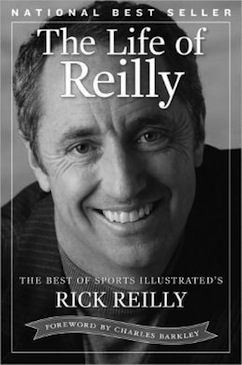