Mike Ditka is a former American football player, coach, and television commentator. A member of both the College Football and Pro Football Hall of Fame, he was the 1961 UPI NFL Rookie of Year, a five-time Pro Bowl selection and five-time All-Pro tight end with the Chicago Bears, Philadelphia Eagles, and Dallas Cowboys of the National Football League (NFL).

He was an NFL champion with the 1963 Bears, and is a three-time Super Bowl champion, playing on the Cowboys Super Bowl VI team as well as winning as an assistant coach for the Cowboys in Super Bowl XII, and coaching the Bears to victory in Super Bowl XX. He was named to both the NFL’s 50th and 75th Anniversary All-Time Team.

As a coach for the Bears for 11 years he was twice both the AP and UPI NFL Coach of Year (1985 and 1988). He also coached the New Orleans Saints for three years.

In 1985 and 1988 he was awarded NFL Coach of the Year honors by the Associated Press, The Sporting News, and Pro Football Weekly.

On December 9, 2013, Ditka’s Bears jersey number, 89, was retired in a halftime ceremony during a Monday Night Football game in Chicago as the Bears hosted the Dallas Cowboys, for whom Ditka also played and worked as an assistant coach under the late Tom Landry. “Thank you, thank you, thank you, and go Bears!” Ditka told the crowd.

In 1988, his fearsome blocking and 427 career receptions for 5,812 yards and 43 touchdowns earned him the honor of being the first tight end ever inducted into the Pro Football Hall of Fame. Ditka also scored two touchdowns on offensive fumble recoveries, tying seven other players for the most in NFL history. In 1999, he was ranked number 90 on The Sporting News’s list of the 100 Greatest Football Players.

He is known by the nickname “Iron Mike,” which he has said comes from his being born and raised in a steel town in Pennsylvania.

To request Mike Ditka to be a guest speaker at your next event, contact:
Robinson Speakers Bureau | The Gold Standard For Speakers
+1 646-504-9849 | info@robinsonspeakers.com 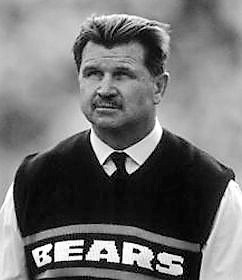