Maria Bello has captivated audiences with her many diverse roles in such films as The Cooler with William H. Macy, (Golden Globe and SAG Nomination), A History of Violence opposite Viggo Mortenson and Ed Harris (NY Film Critics win and Golden Globe nomination), along with close to 30 other films.

Bello began her career as an activist at Villanova University where she majored in Peace and Justice Education and worked at the Women’s Law Project in Philadelphia. She has worked with Save the Children, The Feminist Majority, Vital Voices, and Save Darfur; her main focus being the empowerment of women worldwide. She has been on the hill with the women of Darfur to address the issue of sexual violence and rape as a weapon of war. Variety magazine honored her in 2009 as one of the most powerful women in Hollywood for her work with Save Darfur. She co-hosted the first health summit in the USA for the African First Ladies and continues to work with them.

For the last three years, she has worked in Haiti with Artists for Peace and Justice, raising funds and awareness of the extreme poverty there, and the plight of women and children. Six days after the earthquake in January 2010, she traveled to the country bringing emergency relief supplies to Port au Prince and continues her work there. She started a women’s clinic and has opened a new clinic and education program in Cite Soleil under the title of her newly founded NGO – We Advance. We Advance is an organization dedicated to advancing women’s health, safety, and wellbeing throughout Haiti.

She works with the Haitian Women’s Group, Femmes en Democratie to support their mission of women’s economic and political opportunity, and to ensure that women have full participation in the rebuilding of Haiti. She filmed and spearheaded the media campaign to elect Haitian women. The TV and radio spots ran throughout Haiti.

Bello has been public speaking for the last three years on international women’s issues, gender-based violence, and rape as a weapon of war. She blogs for the Huffington Post about Haiti and about the problems with large NGO’s. She also produced the Haitian documentary, Sun City Picture House, an award-winning short film.

In September 2011, she joined President Martelly’s Advisory Council on Investing in Haiti, alongside President Clinton, Muhammad Yunus and Denis O’Brien, among others, advocating for investments for women in the country. She is a member of CGI and works on gender policy within the Haiti Network.

This upcoming spring, Bello will release her memoir Love is Love: A New Way of Talking About Family and Partnership. Based on her 2013 New York Times column, the book will share her coming out story and comment on the new modern family.

To request Maria Bello to speak at your next event, contact:
Robinson Speakers | The Gold Standard For Keynote Speakers
646-504-9849 | info@robinsonspeakers.com 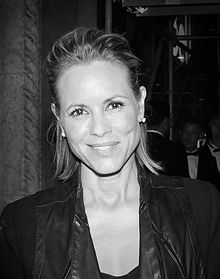