Kenneth Cole has built a 150 store-strong retail empire, uniting his fashion instincts and business acumen with his philanthropic convictions. Mr. Cole’s influence reaches far beyond the world of fashion – he has been a dynamic advocate for many causes ranging from initiatives for the homeless to his work as Chairman of the American Foundation for AIDS Research (amfAR).

A business that began over 25 years ago out of the back of a 40-foot trailer, Kenneth Cole Productions has risen to the top of American fashion at lightning speed and set the standards for others to meet. Kenneth Cole Productions is one of the most widely revered and consistently focused fashion companies with over 5,500 global points of distribution in 59 countries, including nearly 100 Kenneth Cole domestic retail stores and 75 internationally.

With retail sales in excess of one and a half billion dollars, the company has five lifestyle brands: Kenneth Cole New York; Reaction Kenneth Cole; Le Tigre; Unlisted; and Gentle Souls and there are currently 30 licensees that cover 71 dual gender and multi-brand product categories and 26 product categories from swimwear to kidswear to fragrance. Mr. Cole is the ultimate driving force behind all the brands and the company’s creative director in all areas from design to marketing.

Sometimes politically ironic and irreverent but always socially conscious and relevant, Mr. Cole’s advertising has touched on everything from gun control and cloning to abortion and AIDS. He believes that “To be aware is more important than what you wear” and abides by two mantras: “What we stand for is more important that what we stand in” and “We may not heal the world, but we hope to be an accessory.”

To request Kenneth Cole to speak at your next event, contact:
Robinson Speakers | The Gold Standard For Keynote Speakers
646-504-9849 | info@robinsonspeakers.com 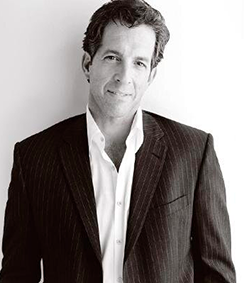