Jimmy Johnson was the architect of the Dallas Cowboys’ consecutive victories in Super Bowls XXVII and XXVIII, serving as the organization’s head coach from 1989 to March 1994. He was named to the position on Feb. 25, 1989, the day after Jerry Jones, his collegiate teammate, purchased the franchise.

After retiring as head coach of the two-time defending Super Bowl Champion Cowboys following the 1993 season, Johnson joined FOX Sports in April 1994 to serve as an analyst on the-then fledgling FOX NFL SUNDAY pregame show, where he remained for its first two seasons. Johnson resumed his role in 2002, following a four-year stint as head coach of the Miami Dolphins, during which time he led them to three playoff berths.

Johnson is one of only six head coaches in NFL history to guide a team to back-to-back Super Bowl wins, and in three of his final four years with the Cowboys, he was named NFL Coach of the Year by at least one national media outlet. During that time, his clubs compiled a record of 50-22 (.694), and the Cowboys won 39 of their last 50 games (.780). In 1992, he led the team to a franchise-record 13 regular-season victories (tied in the 2016 season) and a team record of 16 wins overall. As head coach of the Cowboys, he posted an overall 44-36 regular-season record and went 7-1 in postseason play.

An alumnus of the University of Arkansas, Johnson signed a four-year contract to become head coach and general manager of the Miami Dolphins in 1996. He succeeded the legendary Don Shula, becoming the third head coach in franchise history. In four seasons at Miami, Johnson compiled a 36-28 record and went 2-3 in five postseason games. He retired from the Dolphins on Jan. 16, 2000, with an 80-64 regular-season record as an NFL head coach and a 9-4 postseason mark.

Johnson moved to the NFL after completing five seasons and a 52-9 record as head coach of the University of Miami, netting two Orange Bowl titles, two No. 2 finishes and a National Championship in 1987. He was the first coach, and one of only two in football history (Barry Switzer), to serve as head coach of a Super Bowl champion and a national collegiate champion team.

To request Jimmy Johnson to be a guest speaker at your next event, contact:
Robinson Speakers Bureau | The Gold Standard For Speakers
+1 646-504-9849 | info@robinsonspeakers.com 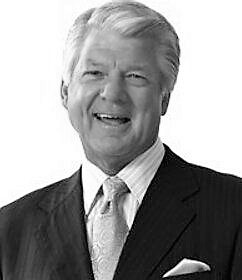