Synopsis
Entrepreneur and e-commerce pioneer Jeff Bezos was born on January 12, 1964, in Albuquerque, New Mexico. Bezos had an early love of computers and studied computer science and electrical engineering at Princeton University. After graduation, he worked on Wall Street, and in 1990 became the youngest senior vice president at the investment firm D.E. Shaw. Four years later, he quit his lucrative job to open Amazon.com, a virtual bookstore that became one of the internet’s biggest success stories. In 2013, Bezos made headlines when he purchased The Washington Post in a $250 million deal.

Early Life and Career
Jeff Bezos was born on January 12, 1964, in Albuquerque, New Mexico, to a teenage mother, Jacklyn Gise Jorgensen, and his biological father, Ted Jorgensen. Bezos’s parents were married less than a year, and when Bezos was four years old his mother married his step-father Mike Bezos, a Cuban immigrant.

As a child, Jeff Bezos showed an early interest in how things work, turning his parents’ garage into a laboratory and rigging electrical contraptions around his house. As a teenager, his family moved to Miami where he developed a love for computers and excelled in school, becoming the valedictorian of his class. In high school, he also started his first business, the Dream Institute, an educational summer camp for fourth, fifth and sixth graders.

Bezos pursued his interest in computers at Princeton University, where he graduated summa cum laude in 1986 with a degree in computer science and electrical engineering. After graduation, he found work at several firms on Wall Street including Fitel, Bankers Trust, and the investment firm D.E. Shaw where he met his wife Mackenzie and was named the youngest vice president in 1990. While his career in finance was extremely lucrative, Bezos chose to make a risky move into the nascent world of e-commerce. He quit his job in 1994, moved to Seattle and targeted the untapped potential of the internet market by opening an online bookstore.

Pioneering E-Commerce
Bezos set up the office for his fledgling company in his garage where, along with a few employees, he began developing software. They expanded operations into a two-bedroom house, equipped with three Sun Microstations, and eventually developed a test xenicaltab site. After inviting 300 friends to beta test the site, Bezos opened Amazon.com, named after the meandering South American River, on July 16, 1995.

The initial success of the company was meteoric. With no press promotion, Amazon.com sold books across the United States and in 45 foreign countries within 30 days. In two months, sales reached $20,000 a week, growing faster than Bezos and his start-up team had envisioned.

Amazon.com went public in 1997 and many market analysts questioned whether the company could hold its own when traditional retailers launched their own e-commerce sites. Two years later, the start-up not only kept up, but also outpaced competitors, becoming an e-commerce leader.

Bezos continued to diversify Amazon’s offerings with the sale of CDs and videos in 1998, and later clothes, electronics, toys and more through major retail partnerships. While many dot.coms of the early ’90s went bust, Amazon flourished with yearly sales that jumped from $510,000 in 1995 to over $17 billion in 2011.

In 2007, Amazon.com released the Kindle, a handheld digital book reader that allows users to buy, download, read and store their book selections. That same year, Bezos also set his sights far, far, away, announcing his investment in Blue Origin, a Seattle-based aerospace company that is developing technologies to offer space travel to paying customers.

Bezos then moved Amazon into the tablet marketplace with the unveiling of the Kindle Fire in 2011. The following September, he announced the new Kindle Fire HD, the company’s next generation tablet designed to give Apple’s iPad a run for its money. “We haven’t built the best tablet at a certain price. We have built the best tablet at any price,” Bezos said, according to ABC News.

Buying ‘The Washington Post’
Bezos made headlines worldwide on August 5, 2013, when he purchased The Washington Post and other publications affiliated with The Washington Post Co., which owns the paper and other entities, for $250 million cash. The deal marks the end of the four-generation reign over The Post Co. by the Graham family, including Donald E. Graham, the company’s chairman and chief executive, and his niece, Post publisher Katharine Weymouth.

To request Jeff Bezos to speak at your next event, contact:
Robinson Speakers | The Gold Standard For Keynote Speakers
646-504-9849 | info@robinsonspeakers.com 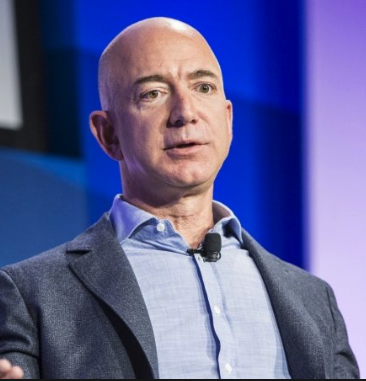