James K. Glassman is the founding executive director of the George W. Bush Institute, dedicated to research and action in four areas: education, global health, human freedom and economic growth. The Institute is part of the George W. Bush Presidential Center, which will also include a library and museum, on the campus of Southern Methodist University in Dallas.

Glassman served from June 2008 to January 2009 as Under Secretary of State for Public Diplomacy and Public Affairs, leading the government-wide international strategic communications effort. Among his accomplishments at the State Department was to bring new Internet technology to bear on outreach to foreign publics, an approach he christened Public Diplomacy 2.0.

Prior to his State Department post, from June 2007 to June 2008, he was chairman of the Broadcasting Board of Governors, which directs all non-military, taxpayer-funded U.S. international broadcasting, including Voice of America, Radio Free Europe and Alhurra TV. He continued to serve as a governor of the BBG, representing the Secretary of State, from June 2008 to January 2009.

Since February 2010, he has been moderator of Ideas in Action, a weekly series on public policy issues, aired on more than 100 public television stations around the country. He was previously moderator of two weekly TV programs in the late 1990s: Capital Gang Sunday on CNN and TechnoPolitics on PBS.

For the 2009-2010 school year, he was Diplomat-in-Residence at the School of International Service at American University in Washington, where he teaches a course on public diplomacy to undergraduates.

Glassman has had a long career as a journalist and publisher. He served as president of the Atlantic Monthly magazine, publisher of The New Republic magazine, executive vice president of U.S. News & World Report and editor and co-owner of Roll Call, the congressional newspaper. Between 1993 and 2004, he was a columnist for The Washington Post and The International Herald Tribune. Shortly after graduating from college, he started Figaro, a weekly newspaper in New Orleans.

He has written three books on investing. His most recent book is Safety Net: The Strategy for De-Risking Your Investments in Turbulent Times (February 2011). His articles on finance, economics and foreign policy have appeared in The New York Times, The Wall Street Journal, Los Angeles Times and many other publications.

Between 1996 and 2008, he was a senior fellow at the American Enterprise Institute in Washington, DC. He was formerly a member of the Policy Advisory Board of Intel Corp. and was a senior advisor to AT&T Corp. and SAP America, Inc.

He is a graduate of Harvard University, where he was managing editor of the daily newspaper, The Crimson. He is married to Beth Ourisman Glassman and has two children, two stepchildren and three grandchildren. He lives in Bethesda, MD, and Falls Village, CT.

To request James Glassman to be a speaker at your next event, contact:
Robinson Speakers Bureau | The Gold Standard For Keynote Speakers
+1 646-504-9849 | info@robinsonspeakers.com

Thomas Kolditz: Director of the Doerr Institute for New Leaders 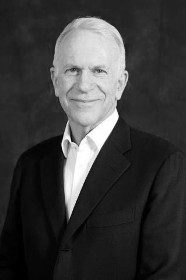