Social Media Speaker Jack Dorsey is the creator of Twitter and the CEO of Square, a mobile payment company. After the popularity of instant messaging, Jack thought if the software’s user status could be shared with friends easily. He came to Odeo, who at the time was very interested in text messaging. He and Biz Stone decided to build a prototype of SMS text and the status message idea. Twitter was created in two weeks and had attracted many users at Odeo and Evan Williams who had left Google after selling Pyra Labs and Blogger.

Twitter was the spun off of Obvious and was co-founded by Greer, Stone and Williams. In 2008, Evan Williams took over as CEO and Jack became chairman of the board. In June 2015, Twitter announced that Jack would act as the company’s interim CEO until a replacement was found for Dick Costolo.

Jack Dorsey also began Square, Inc. which was a new platform to accept debit and credit cards on a mobile device for small businesses. This device can be attached to the iPhone, iPad or Android devices to act as a mini card reader. Square can also work as a paperless receipt sender via text messaging or email.

To request Jack Dorsey to be a speaker at your next event, contact:
Robinson Speakers Bureau | The Gold Standard For Keynote Speakers
+1 646-504-9849 | info@robinsonspeakers.com 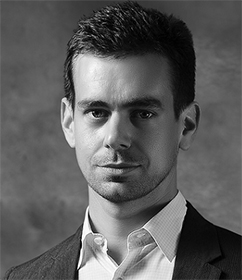