Garry Kasparov caught the world’s attention in 1985, when at age 22 he became the youngest world chess champion in history. During his record 20 years as the world’s top-ranked player, Kasparov gained notoriety for his games against IBM’s Deep Blue, which prompted a re-evaluation of the role artificial intelligence might play in the future of society. When he retired from professional chess in 2005, Kasparov wasted no time taking on new projects, joking that he would be far busier as a retiree. He quickly became a strong advocate of the Russian pro-democracy movement, speaking out against the repressive regime of Vladimir Putin.

Shortly after his retirement, Kasparov created and remains the chairman of the United Civil Front; he also co-led The Other Russia coalition, which focused on uniting the Russian opposition to Putin under the banner of free and fair elections. Kasparov also turned his energy to writing and public speaking. “I have spent my life thinking about thinking,” he said, “and I find many others are as interested in the field of improving human performance as I am.”

Kasparov’s keynote lectures and seminars on strategic thinking, achieving peak performance, and tech innovation have been acclaimed in dozens of countries. His 2007 book on decision-making, “How Life Imitates Chess” was translated into over 20 languages.
In 2002, Kasparov launched The Kasparov Chess Foundation in New York City with the intention of bringing chess into the educational system in the USA and worldwide. Kasparov has long accredited chess with providing many benefits to schoolchildren, and KCF’s program is now used in thousands of schools. Since its creation, KCF has formed branches in Europe and Africa, and will continue rapid expansion. In 2012 alone, Kasparov travelled to over a dozen countries to promote scholastic chess programs.

As a speaker, Garry Kasparov is known to touch upon topics relating to success, achieving one’s potential, using strategy to unlock potential and achieve one’s goals, and the future of technology in our society.

To request Garry Kasparov to speak at your next event, contact:
Robinson Speakers | The Gold Standard For Keynote Speakers
646-504-9849 | info@robinsonspeakers.com 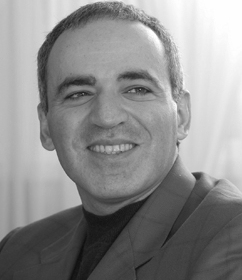