International Actress and Global Ambassador for the non-profit organization, “Because I am a Girl”

International actress and model Freida Pinto first made her global breakthrough as the star of Danny Boyle’s Academy Award winning film, Slumdog Millionaire. Since then, she has continued to build an impressive list of films and commercial campaigns on the world stage. As an international model, Freida currently serves as a spokesperson of L’Oreal Paris.

Most recently, Freida became the global ambassador for the non-profit organization Plan International’s Because I Am A Girl campaign, which helps to support millions of girls get the education, support and choices they need to move themselves from a life of poverty to a future with opportunity.

Freida’s other acting credits include the global box-office hit, Rise of the Planet of the Apes, Immortals and Woody Allen’s You Will Meet a Tall Dark Stranger. She is next scheduled to appear in Terrence Malick’s Knight of Cups alongside Christian Bale, Natalie Portman and Cate Blanchett.

In addition to her phenomenal acting success, Freida continues her philanthropic work as a staunch advocate for education and gender equality through her on-going work with Because I Am A Girl, Girl Rising and The Agassi Foundation.

To request Freida Pinto to speak at your next event, contact:
Robinson Speakers | The Gold Standard For Keynote Speakers
646-504-9849 | info@robinsonspeakers.com 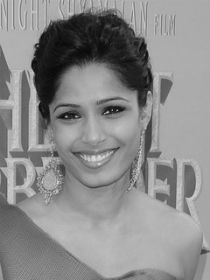