Psychotherapist and Expert on Personal Interaction

Perel grew up amongst Holocaust survivors in Antwerp, Belgium and noted two groups around her: “those who didn’t die, and those who came back to life”. Her observation was that “those who didn’t die were people who lived tethered to the ground, afraid, untrusting. The world was dangerous, and pleasure was not an option. You cannot play, take risks, or be creative when you don’t have a minimum of safety, because you need a level of unself-consciousness to be able to experience excitement and pleasure. Those who came back to life were those who understood eroticism as an antidote to death.”

Perel subsequently trained in psychodynamic psychotherapy before finding a professional home in family systems theory. She initially worked as a cross-cultural psychologist with couples and families.
Perel is married to Jack Saul, Assistant Professor of Clinical of Population and Family Health at Columbia University’s Mailman School of Public Health.

To request Esther Perel to speak at your next event, contact:
Robinson Speakers | The Gold Standard For Keynote Speakers
646-504-9849 | info@robinsonspeakers.com 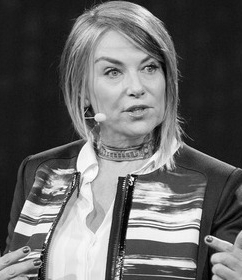