Erik Wahl is the Internationally Recognized Graffiti Artist, Author, Entrepreneur, And The Most Unique Leadership Speaker In America

He redefines the term “keynote speaker.” Pulling from his history as both a businessman and an artist, he has grown to become one of the most sought-after corporate speakers available today. Erik’s on-stage painting seamlessly becomes a visual metaphor to the core of his message, encouraging organizations toward profitability through innovations and superior levels of performance. His list of clients includes AT&T, Disney, London School of Business, Microsoft, FedEx, Exxon Mobil, Ernst & Young, and XPrize; Erik has even been featured as a TED presenter. The responses received have been nothing short of incredible, with standing ovations to prove it.

How does Erik Wahl combine his worlds of graffiti art and business? How does he shift from being an artistic iconoclast and into the corporate lecture circuit? How is he in-demand as one of the most requested speakers in the world on the subjects of creativity, change, leadership and the psychology of performance?

The Art Of Leadership

As the landscape for business continues to change, Leaders need to foster a steady stream of disruptive strategies and unexpected solutions to stay ahead of the game. This requires solutions that revive stagnant markets or completely reinvent the competitive dynamics of an industry. Disruptive thinking is about fostering a culture of innovation leadership that provides the framework and motivation to generate those strategies and execute those solutions. It is an essential skill for any business leader, from a small start-up to a global corporation, with the desire to transform organizational processes and behaviors, and ask, “Why hadn’t we ever thought about our business and culture this way before?”

To thrive in this new era, organizations and institutions, executives and entrepreneurs need to rethink the habits that have made them successful in the past, and challenge the conventional wisdom and industry models that have defined their world.

The Art Of Vision

The best sustainable edge in business is the ability to differentiate yourself from your competition. Through this entertaining and highly practical program, we will uncover new ways to make your organization more creative, innovative and profitable, but more-so, help your employees to see the need to become better storytellers within your company and towards your industry.

Professionals at all levels, who embrace innovative strategies, can achieve superior levels of performance by creatively and visibly differentiating themselves from the competition. No matter what kind of organization—from small companies to large corporations—employees at all levels will better embrace the future by becoming more innovative, more productive and ultimately more profitable.

At an early age, Erik Wahl was told by his well-meaning teacher that “art was not his strength”. Being a disciplined student, Erik listened. He put down his crayons and paintbrushes and did not pick them up again for another 20 years. In the meantime, he studied hard and learned to play by the rules. Erik concluded, like most, that strong grades, a solid college education and a good conservative corporate job with predictable growth would be sufficient.

But after 10 years in the corporate world, Erik could sense his talents were wasting away inside of him. However, it wasn’t until he lost everything that he came to find himself. A heartbreaking death to everything that he had worked so hard to achieve was the birth of his story.

Playing it safe was no longer an option. It was time to get drastic.
In a time of self-reflection, frustration and anger, he became determined to break free from the addiction of security that had lulled the passionate version of himself to sleep. By intentionally going against the grain of this addiction, Erik’s early artist was re-awakened. He poured himself into his own new ideas, writings and art with reckless abandon and spent his free time in the art community. In other words, Art became his rehab.

But Erik also quickly discovered that the artist community also had limitations and was equally as frustrating. Although most artists had incredible ideas and vision, they lacked the practical application to create a business of actionable substance. They did not have the tools or training to make a living. Their vision did not translate and often succumbed to the cliché of being secluded because the world did not understand their incredible vision.

Then came the epiphany: we are all capable of so much more than we have been preconditioned for. There is tremendous unexplored potential that exists by combining our analytical mind and our natural creative abilities. Shortly thereafter, The Art of Vision was born. Fearlessly determined to break through the system, Erik and his wife, Tasha, created a company capable of “setting the captives of corporate america free” from the same robotic mind-numbing path to which he had previously fallen prey.

His career skyrocketed! Passion! Profit! Over 14 countries, 500,000+ audience members, and most importantly, the freedom to play by his own rules!

Erik Wahl is not a pretty picture of figuring out the system. He and Tasha are the chainsaw breaking through the system and not stopping until they create a new and better version. He is now one of the most sought-after speakers in the world on the corporate lecture circuit, but he has retained the raw, unbridled passion of his arts to channel his ideas in a fresh and entertaining way. The rest of his story is yet to happen, but it continues to grow each and every day.

Erik has dedicated his life to his passions, one of which is to unshackle you from those similar chains that have, at one point or another, previously held each of us down. Art is far more than a finished product; Art is a new way to view the world. He wants to remind you to never give up seeking the art of vision you have inside of you. He wants to tell you that whatever well-meaning lie you were told as a child that crushed your dreams simply wasn’t true.

To book Erik Wahl as a keynote speaker: 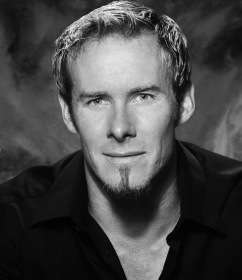