Emmitt Smith is a professional football icon and one of the greatest to ever play the game. In his 15 years in the National Football League, Smith amassed many records that still stand today. This includes the all-time leading rusher with 18,355 career rushing yards and the all-time rushing touchdown record holder with 164 TD’s. Smith’s impressive resume also includes three Super Bowl champion rings and being inducted into the Pro Football Hall of Fame as part of the Class of 2010.

As a first-round pick in the 1990 NFL Draft, Smith was the cornerstone of the Dallas Cowboys offense for 13 seasons. The eight-time Pro Bowler was the first player in NFL history to rush for more than 1,000 yards in 11 consecutive seasons and on October 27, 2002 he surpassed Walter Payton as the NFL’s all-time leading rusher. Smith led the NFL in rushing four times, he was the league MVP in 1993, and MVP of Super Bowl XXVIII. His 175 career touchdowns rank second in NFL history.

Smith played his final two NFL seasons with the Arizona Cardinals (2003 and 2004) before signing a one-day contract in February 2005, so he could officially retire as a member of the Dallas Cowboys. In September 2005, Smith was inducted to the Cowboys Ring of Honor with former teammates Troy Aikman and Michael Irvin. He was also enshrined in the College Football Hall of Fame in 2006 for his All-American career at the University of Florida.

Previously serving as a football analyst for ESPN and the NFL Network, Smith also appeared as a guest college football analyst during FOX’s BCS National Championship pre-game coverage. His post-career television success includes winning the third season of ABC’s popular primetime reality show Dancing with the Stars, with his style being deemed “the King of effortless cool”, being featured on NBC’s Who Do You Think You Are, and returning to the ballroom in 2012 for Dancing with the Stars All-Stars.

Smith can also add author to his long list of accomplishments. Published in 2011, his most recent book, Game On, outlines the principles that helped Smith succeed both on and off the field. Active in charitable outreach both in the Dallas area and on a national level, Smith founded Pat & Emmitt Smith Charities with his wife to provide unique experiences and educational opportunities to underserved youth. Smith currently resides with his wife, Pat, and their five children in Dallas, TX.

To request Emmitt Smith to be a guest speaker at your next event, contact:
Robinson Speakers Bureau | The Gold Standard For Speakers
+1 646-504-9849 | info@robinsonspeakers.com 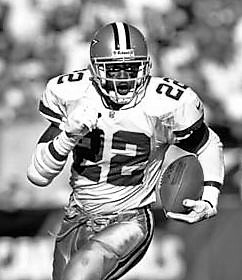