In the fall of 2003, Elizabeth Holmes, a 19-year-old sophomore at Stanford, plopped herself down in the office of her chemical engineering professor, Channing Robertson, and said, “Let’s start a company.”

Robertson, who had seen thousands of undergraduates over his 33-year teaching career, had known Holmes just more than a year. “I knew she was different,” Robertson told me in an interview. “The novelty of how she would view a complex technical problem–it was unique in my experience.”

Holmes had then just spent the summer working in a lab at the Genome Institute in Singapore, a post she had been able to fill thanks to having learned Mandarin in her spare hours as a Houston teenager. Upon returning to Palo Alto, she showed Robertson a patent application she had just written. As a freshman, Holmes had taken Robertson’s seminar on advanced drug-delivery devices–things like patches, pills, and even a contact-lens-like film that secreted glaucoma medication–but now she had invented one the likes of which Robertson had never conceived. It was a wearable patch that, in addition to administering a drug, would monitor variables in the patient’s blood to see if the therapy was having the desired effect, and adjust the dosage accordingly.

Elizabeth Holmes founded her revolutionary blood diagnostics company, Theranos, when she was 19. It’s now worth more than $9 billion, and poised to change health care.

To request Elizabeth Holmes to speak at your next event, contact:
Robinson Speakers | The Gold Standard For Keynote Speakers
646-504-9849 | info@robinsonspeakers.com 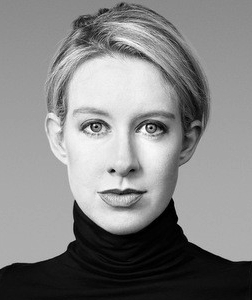